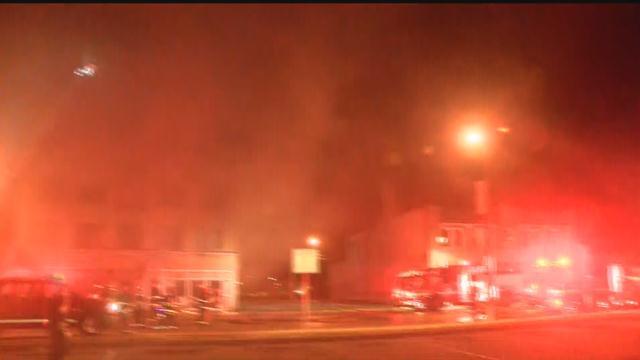 Around 2:20 AM Milwaukee Police tweeted officers were restoring order to the area of Sherman and Burleigh and reducing deployments,

This started with a Milwaukee Police Officer killing a suspect on Saturday.

The incident began when two uniformed MPD officers stopped two suspects in a car in the 3200 block of N. 44th Street at about 3:30 p.m. on August 13. Shortly after stopping the suspects, both occupants fled from the car on foot.  The officers pursued the suspects, and during the foot pursuit one officer shot one suspect, armed with a semiautomatic handgun, in a yard also in the 3200 block of N. 44th Street.  The suspect died from his injuries at the scene.

Disturbances were reported throughout the Northwest side of Milwaukee.

One of CBS 58’s two-person reporting crew got attacked while covering the BP Gas station fire.

Cameras and our satellite backpacks that allow us to go live were stolen when a crowd of a dozen people physically attacked our team.

During the disturbance rocks were thrown at officers, reporters and squad cars. Several squad cars were set on fire.

During a press conference, Mayor Barrett called for parents to tell their children to come home.

"We are going to make sure that this city is safe," said Barrett.

Firefighters had a hard time stopping fires because guns were being fired in the areas.
A gas station at Sherman and Burleigh was set on fire, according to Milwaukee Police.

This gas station was a place of protest in July when protesters said an employee fired gun shots at children. The employee said the children rushed the store and he feared for his life.