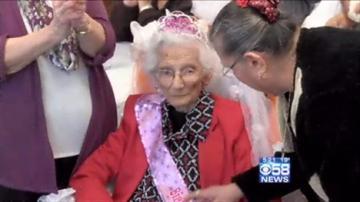 Her daughter says her mother needs help from time to time, but has maintained her independence.

\"It's getting a little hard for her, but she's doing okay,\" Carmen Roman told CBS 58 News.

As with most daughters she wants to make sure her mom is eating. \"She eats good,\" Roman shared. \"She takes care of herself most of the time.\"

Maybe that's the key to a long life.