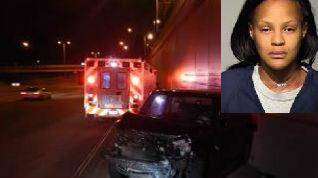 According to the Milwaukee County Sheriff's Office 23-year-old Lashawnda Johnson, of Milwaukee, crashed her vehicle on I-94 westbound at N. 16th Street on Saturday, November 5 at 3:15 AM. She was charged with first offense DUI.

A 2-year-old child was not restrained in a car seat and was transported to Children’s Hospital for treatment of a broken leg.

When deputies arrived, Johnson was inside the vehicle’s passenger seat collecting her belongings, and the child was standing outside between the vehicle and traffic lanes.

Johnson’s blood alcohol content registered .15. If convicted on all charges, Johnson faces up to 29 ½ years in prison.