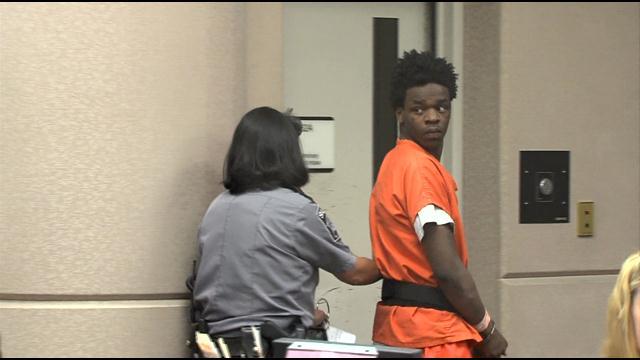 Gerald Harper, 18, is facing two homicide charges for a violent rollover crash last month that killed two young people and broke the back of a third.

During a preliminary hearing Friday, his defense attorney repeatedly questioned the lead officer in the case of if they can proved Harper was really behind the wheel that day in March, or if he just ended up in the driver's seat as the car flipped and hit a concrete decorative wall near Lloyd and Hi- Mount Blvd.

Officer Michael Hansen testified that the first officer on the crash scene, had seen the stolen vehicle go through two stop signs before the crash.

\"Initially he did not,\" replied Officer Hansen. \"He did observe one of the juveniles with his head hanging out the window. He determined that juvenile was deceased. He can hear yelling coming from the driver's side. He went back to that side. At this time citizens are trying to pry the door open.  At this time he observes Mr. Harper.\"

\"Is that after the car came to a stop or while it was moving?\" pressed Steinberg.

\"It is after that vehicle came to rest.\" replied Officer Hansen.

Assistant District Attorney Anotoni Apollo soon objected to the line of questioning. \"I'm not certain the officer is capable of making that determination.\"

Apollo said that would be for an accident reconstruction team to determine and out of the parameters of the purpose of a preliminary hearing.

The court commissioner agreed and bound Harper over for trial.