Milwaukee streetcar stopped in its tracks? 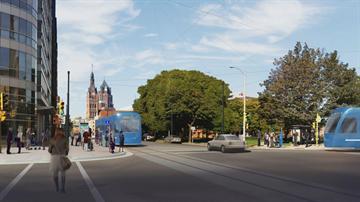 MILWAUKEE -- On Friday, there was a big win for those against a street car in Milwaukee.

The Wisconsin Public Service Commission ruled in favor of those challenging the city's efforts to force Wisconsin utility companies and rate payers to front the cost of relocating their facilities for the project.

This cost was estimated by some at around $20 million.

Mayor Tom Barrett has been an advocate for the streetcar.

A statement from the Mayor's Office said:

\"The decision by the PSC is not surprising. Mayor Barrett will continue to focus on moving Milwaukee forward by providing residents and employers with transportation options that connect people to jobs and other destinations around Milwaukee.\"

Rick Esenberg, President and General Counsel of the Wisconsin Institute for Liberty and Law, said:

“We are gratified that the Public Service Commission has issued the final decision that we requested. This decision should put to rest any idea that the City of Milwaukee can find some way to make Wisconsin utilities and their ratepayers absorb any of the costs of the Streetcar Project. The City has admitted that there is no room in its federally-funded project budget to pay utility costs. Perhaps it is time for the City to let Milwaukee taxpayers know that the money for this part of the project – and it is a lot of money - will come out of their pockets.”

Longtime opponent of the streetcar, Alderman Bob Donovan said that on Tuesday he ask the Mayor to put an end to the streetcar.

Donovan said there are bigger issues the city needs to take on and that the city has already spent thousands defending this case.

Donovan is running to unseat Barrett as Mayor.