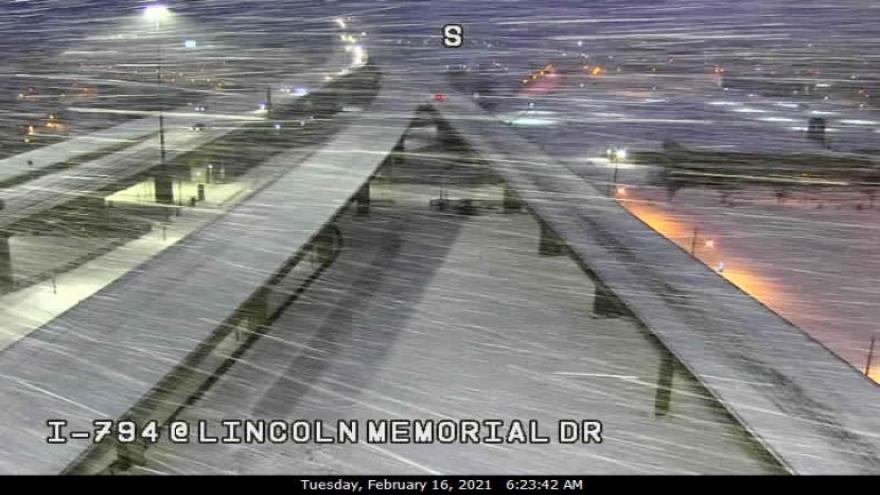 "We continue clearing the streets through the neighborhoods and deploying different equipment to address narrow streets that are difficult to access due to their narrowness and over-parked vehicles."

DeNeve said some crews may redeploy to the main streets to prepare for rush hour traffic depending on when evening snowfall begins.

The city is continuing with a second night of a snow emergency. The emergency will allow proper clearing of the other side of the street, officials say.

There is no parking allowed on main streets from 10 p.m. to 6 a.m. Alternate side parking will be required on side streets during these hours. Vehicles should be parked on the odd numbered side of the street.

Crews have been out salting and plowing main streets all night.

"As the snow tapers off this morning and driving (and) turn lanes are safe, crews will be directed onto residential streets," City of Milwaukee Marketing and Communications Officer Brian DeNeve said.

DeNeve said there is no impact expected on parking.

"We encourage neighbors to park off-street when able (or) to park as far to the curb line as possible," DeNeve said. "This will help our daytime crews get access to residential streets and parking lanes."

There is also no impact expected for garbage collections.

Majority of the freeways are still snow covered. If you don’t need to head out anywhere stay put until plows have a chance to clear the roads. @CBS58#ReadyTrafficpic.twitter.com/sAR0kFFrVl

The National Weather Service in Milwaukee says its official observation site at General Mitchell International Airport recorded a snow depth of 22 inches this morning. They say this is the deepest snow depth recorded in Milwaukee since January 2001.

Milwaukee's official observation site at General Mitchell International Airport recorded a snow depth of 22" this morning. This is the deepest snow depth recorded in Milwaukee since January 2001.

Lake effect snow is expected to end Tuesday afternoon. There is another chance of snow on Sunday, but it is followed by a warmup.

Winter Storm Warning will hang on until noon for lakeside areas, including Milwaukee, Racine, and Kenosha Counties.

A couple disabled vehicles this morning. One partially blocking traffic near the Zoo interchange and another near the Marquette. Watch for slick conditions through the rest of the morning. @CBS58#ReadyTrafficpic.twitter.com/Qp9QMz96P2