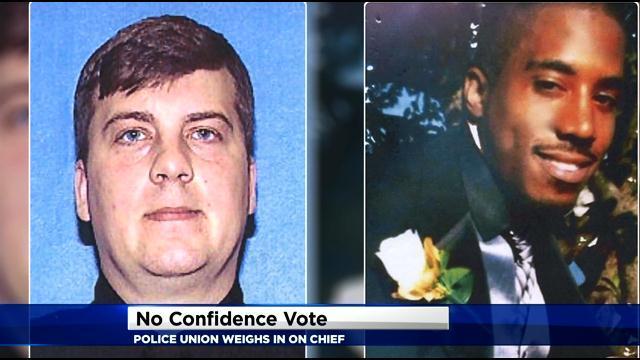 While many of the union's members have had problems with Chief Flynn in the past, the firing of Milwaukee Police Officer Christopher Manney is the latest incident to upset the union. Manney was the police officer who shot and killed Dontre Hamilton at Red Arrow Park in April 2014. Union President Mike Crivello does not dispute the killing of Dontre Hamilton was tragic, but says Manney did what he had to do.

\"The chief has to change his ways or he needs to pack his bags,\" says Union President Mike Crivello. \"He needs to reevaluate and I certainly don't believe he will reevaluate. We've asked him many times over the years to reevaluate different solutions and the answer has always been no.\"

Manney was fired for violating police policy. The chief says Manney's bad decision making led to the use of deadly force. Flynn says he's at piece with his move. Crivello says Flynn's decision has decreased morale. He also alleges officers are now questioning their ability to protect and serve.

Chief Flynn responds to the possible vote of no confidence by the police union saying, \"Bottom line is I've been proud many times to stand up for the cops and controversial issues and back up their difficult decisions. But I've got to stand up to them from time to time as well. When there's an incorrect decision that results in a death, we as an organization have to recognize that.\"

The certified results from the union vote will be delivered to Milwaukee City Hall October 31. Crivello says he wants Mayor Tom Barrett there when the results are delivered. The mayor says he has no plans to do so.

Meantime, the final chapter for ousted former police officer Christopher Manney has yet to be written.

Manney appealed his firing with the Fire and Police Commission, but also filed for disability retirement benefits. Putting into question what would happen if Manney were to be reinstated if the Commission were to rule in his favor.