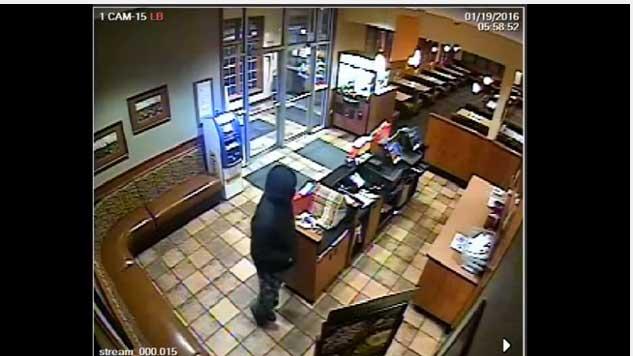 Milwaukee Police are asking the public to help identify a suspect who is accused of robbing at least six local businesses with a knife around the City of Milwaukee.

The same suspect is believed to have committed an armed robbery on February 6 at 9:20 p.m. at the Walgreens at 9040 W. Good Hope Road.

The video featured is from the Walgreens on Wisconsin Avenue and the Denny’s on Capitol Drive. The suspect has entered these locations, pulled out a large knife, and demanded money from the cashier. The suspect appears to act alone and he flees the business on foot and possibly to a vehicle parked nearby.

The suspect is described as a black male, between 20-30 years-old, 6’-6’3” tall, 175 to 200 pounds. He was wearing a black puffy jacket with a hood, black pants, and black shoes. In all of the robberies, he has worn white gloves and a black scarf covering his face. In the robbery at Denny’s he wore pajama pants with the Packers logo on them.