One dead, one in custody following officer-involved shooting near 7th and Maple

NOW: One dead, one in custody following officer-involved shooting near 7th and Maple

MILWAUKEE (CBS 58) -- One man is dead and another is in custody after an officer-involved shooting Tuesday morning on Milwaukee's south side.

Milwaukee Police say a detective and two officers in plainclothes were conducting surveillance for homicide suspect Victor Cintron in the area of 7th and Maple when two suspects approached the officers' car.

"As they were conducting surveillance, there were three officers in this vehicle, and they were approached by a subject who had been concealing his identity in very quick fashion, in a very violent manner, displaying a firearm," said Chief Alfonso Morales in a press conference Tuesday.

Milwaukee Police say one of the suspects was wearing a mask and armed with a handgun. In a press conference Tuesday, Morales said the officers believed the two men were planning to rob them.

"That subject did come directly to the vehicle and what we know of now, to execute a deliberate act of violence," Morales said at a press conference Tuesday evening.

Officers in the vehicle fired shots at the armed and masked suspect.  He was then taken to the hospital where he later died. Police have identified him as a 29-year-old Milwaukee man. Morales said he currently had a warrant for his arrest for burglary.

The other suspect ran from police before he was taken into custody. He has been identified as an 18-year-old man.

Police say they recovered the masked suspect's gun at the scene.

The investigation is ongoing. Chief Morales says it's unknown whether the two men had anything to do with the homicide suspect police were searching for. As of Tuesday evening, Cintron was still not in custody.

The Waukesha Police Department is the lead investigative agency per protocol.

MILWAUKEE (CBS 58) -- Milwaukee Police are on the scene of an officer-involved shooting on Milwaukee's south side. 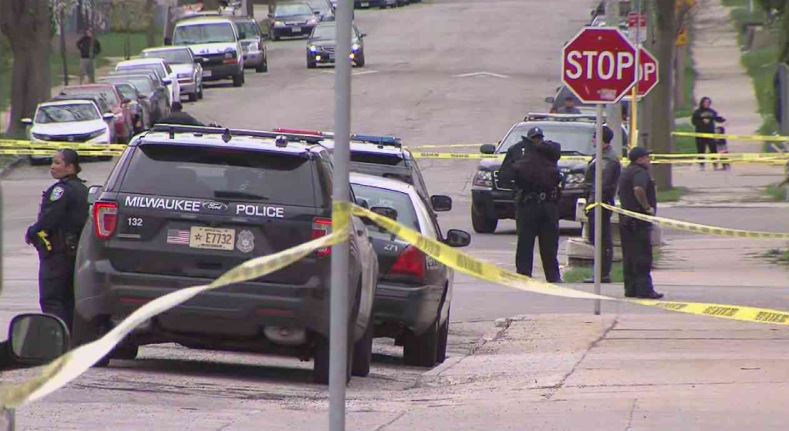 According to police, an officer shot a suspect Tuesday morning near 7th and Maple.

Investigators say no officers were injured and the suspect's injuries are unknown at this time. MPD is asking that everyone avoid the area.

MPD is on scene of an Officer Involved Shooting in the area of 7th and Maple. MPD is requesting that everyone avoid the area at this time. Currently, no officers are injured at this time.

Stay with CBS 58 online and on air for more information.