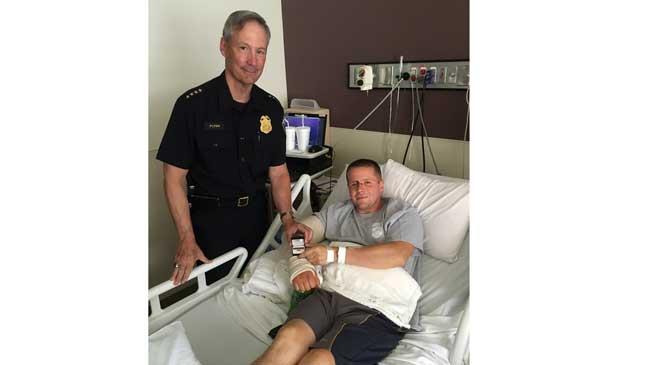 UPDATE: Officer Baronowski will be released from the hospital on Wednesday and there was a special ceremony for him.

He thanked his supporters including officers in Dallas who reached out to him.

Ofc Baranowski thanks his supporters - including officers in Dallas who reached out to him @CBS58 pic.twitter.com/y8kgmcljRS

ORIGINAL:The Milwaukee Police Officer that was shot on Sunday by a West Allis man received the Purple Valor Award from Police Chief Flynn.

Flynn visited the officer in the hospital on Tuesday and presented the award.

The Department sent out a series of photos on social media. It shows Officer Brandon Baronowski,31, in incredibly good shape despite sustaining several wounds that required surgery just yesterday.

The 13 year veteran of the force was responding to a domestic violence call when Tomas Uriegas shot him as he sat in his patrol car.

Uriegas then killed himself.

His family says he suffered from mental illness and issued a public apology to the officer and his family.

The mother of the man that shot the officer spoke to CBS 58 and said that her son wasn't a monster. She went on to say that she believes her son was depressed and wanted to die. Read her story here.