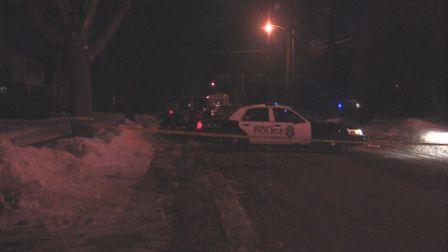 A Milwaukee Police officer shot and killed a man allegedly threatening his wife with a knife early Friday morning on the city's south side.

According to police, officers from District Six were called to a home in the 400 block of E. Plainfield Avenue just before midnight for a report of a wanted suspect threatening his estranged wife with a knife. Officers forced entry into the home and when they arrived found the suspect holding a knife to his wife's throat. Police say they attempted to negotiate with the man, but when he refused to drop the knife one officer fired his weapon. Police did not indicate where the suspect was hit but they do say life-saving measures failed at the scene.

The 44-year-old victim was injured by the suspect, but she did not require medical treatment at the scene. No officers were injured.

Police say the suspect is a 45-year-old male from Milwaukee with an active No Contact Order in place and a history of domestic violence.

In accordance with a new state law, an outside agency must now lead the investigation. The officer involved is a 27-year-old male with six years of service with the Milwaukee Police Department. He has been placed on administrative duty pending the outcome of the investigation.

Police say the Wisconsin Department of Justice's Division of Criminal Investigation has already been contacted and will lead the investigation.