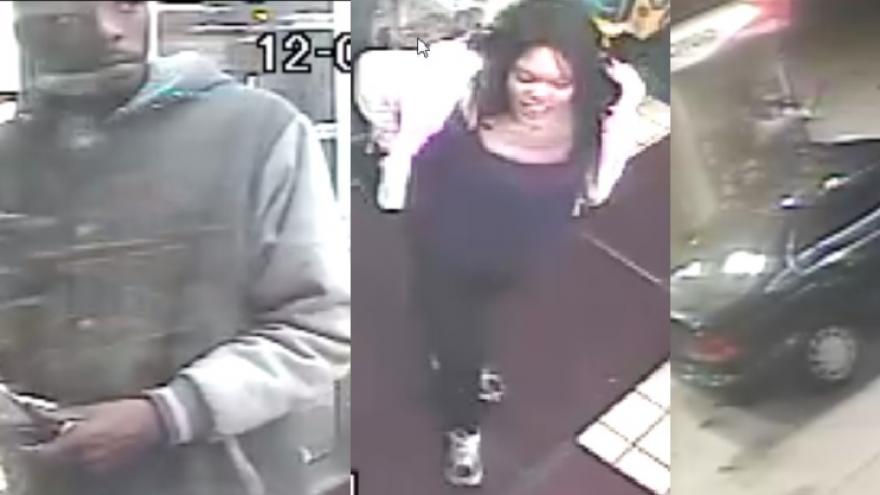 MILWAUKEE (CBS 58) -- Milwaukee Police are asking for help to identify two suspects wanted in connection with a Wednesday, December 6 crime at the Citgo Gas Station located near the intersection of S. 12th Street and W. Lincoln Avenue, around 6:00 a.m.

A 39-year-old woman walked into the gas station and got into a fight with a male suspect who pointed a gun at her. The suspect and a woman that was with him then fled the scene.

The suspect is described as a black man, between 30 to 40-years-old, 6’ to 6’2” tall, and 160-170 pounds with a thin build. He was last seen wearing a black skull cap type hat, a dark letterman-style jacket with light gray sleeves and a light gray hood, dark jeans, and black and red shoes.

The second suspect is described as a black woman, between 30 to 40 years-old, 5’7” to 5’9” tall, and 200-210 pounds with a heavy build, and long black curly hair. She was last seen wearing a white and pink zip-up hooded sweatshirt with a black undershirt and black leggings. Police believe she has a large tattoo on her upper chest area.

Both suspects arrived in a black, late 90s Honda Civic. Surveillance video revealed there was no license plate affixed to the license plate holder. The front passenger’s tire hubcap was also missing.

The suspect and vehicle match two other violent crimes from the South Side that happened Wednesday morning including an armed robbery around 4:10 a.m. near S. Cesar Chavez Drive and W Walker Street and a armed carjacking around 5:00 a.m. near Scott and 31st.