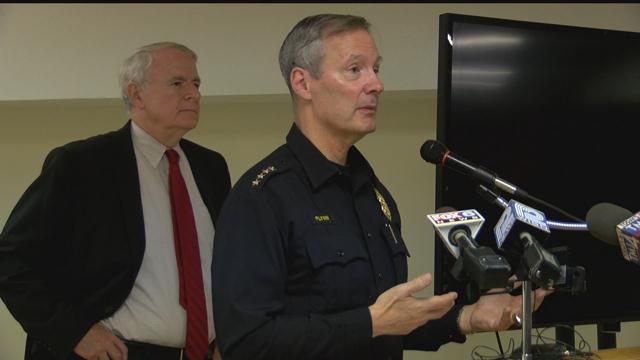 A lot of people are talking about Police Chief Ed Flynn's remarks at the Ceasefire Sabbath Breakfast Thursday in Milwaukee.

During a detailed and lengthy presentation about crime statistics and community outreach, Chief Flynn offered what he called four simple rules for not getting shot.

The first two were simple; don't belong to a gang and don't be a drug dealer.

The audience laughed after the chief's fourth rule.

He went on to stress that many of the shootings in Milwaukee involve arguments between people who are "criminally involved."

Some highlights of the Chief's presentation included:

The homicide rates in Milwaukee for six of the last eight years have been the lowest homicide totals in a quarter of a century.

"There is good news. And then we had last year," Flynn said. "What we don’t know is if we are at the beginning of a trend or was it an abberation".

Milwaukee one of many major cities that saw the increase in homicides last year.

From Louisville to Los Angeles and all the cities had certain things in common including,  intergenerational poverty confined to specific neighborhoods.

The Chief acknowledged  marginal increases in other crimes concentrated on the same neighborhoods and in the 53206 zip code.

The likelihood of being a victim is also significantly higher  in this same zip code.

Citywide non-fatal shooting victims just about the same as last year with a slight increase in 53206 zip code.

Chief Flynn says the analysis proves and decades of research elsewhere supports the concept of police enforcing traffic laws and it had a correlative impact on crime.

He cautioned that  you can’t impose a poor people’s tax because of uptick in traffic stops and supported the use of  warnings as opposed to actual citations.

"The goal is to use traffic enforcement as vehicle to reduce street violence. It affects the public space."

The chief says at the same time there was a decrease in citizen’s complaints.

"Nobody likes to get stopped by a cop, but everybody likes getting a break.".

The chief calls it an overlay of problems. "Where social dislocations exist we’re going to have a concentration of violence."

What brought the crowd to the hush is when he confirmed that  87% of people shot in Milwaukee are African American.

MPD  seizes proportionally more guns than almost any other guns than U.S.

He said Center Street will be the main hurdle.

"This corridor has been a driver of crime for three decades in Milwaukee."

Community outreach involved determining who's renting to whom.

The Chief say it's always one  house on every block with the family that scares everyone and terrorizes the entire block.

Milwaukee is one of 15 Violence Reduction Cities.

The federal government is willing to help via the U.S.  Attorney’s Office.

MPD has also reached out  to the Downtown Business Improvement District to get the businesses along Center street more involved in policing efforts.

The goal is to make residents and business owners feel less isolated.

Another moment that brought the crowd to silence was the revelation that last Saturday,  officers seized five guns along Center Street alone.

One was an AK-47 being fired off along Center.