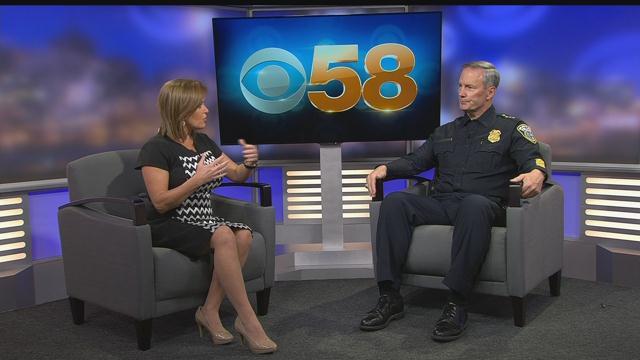 In an exclusive interview with CBS 58 News at 4 p.m., Flynn agreed with Mayor Tom Barrett's staff in saying the numbers won't add up to the kind of savings that can fund a full class of 50 new recruits.

Anchor Michele McCormack asked the Chief if he thought Donovan was exaggerating when he said in every part of the city people are concerned about crime. Police Union President Mike Crivello who supports Donovan's proposal says officers in Milwaukee face "extreme danger" every day, many because they're on solo patrol.

"It's political grandstanding," said Chief Flynn.  "First of all we're all concerned about crime.  Second of all, I can't blame the president of the patrol officers union for wanting to get more members at the expense of the superior officers union.   I suspect that's normal union politics.  But in terns of the number of people we have on solo patrol, it's not significantly different than it was ten years ago."

Chief Flynn noted that he's come under budget seven years in a row and in that time there's been a reduction in complaints and use of force incidents.

"The officers who perform solo and the balance of one and two officer units serves the city well."

Chief Flynn says research indicates a a solo officer is not more likely to get involved in a shooting or use of force issue more than two officer units.

"Most units  in the evening are two officer units when there tends to be more crime and arrests," he added.

Chief Flynn says the department is working hard to recruit African Americans which has been a challenge given recent negative publicity.

We've attached part one of the interview to this story.

Friday on the News at 4 p.m., Chief Flynn talks about his emotional press conference in announcing the arrests of several people in connection with the murder of five year old Laylah Petersen and his over all outlook for the future in security public safety in the city of Milwaukee.