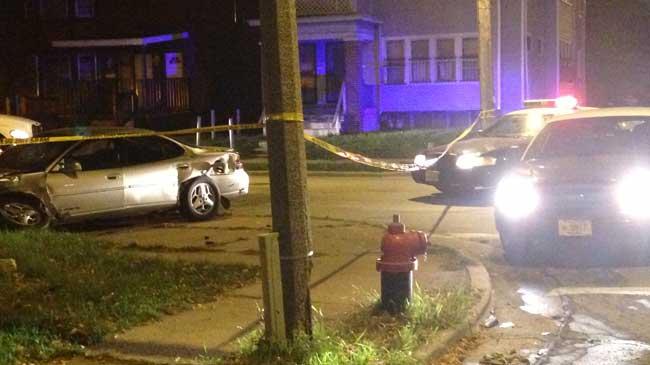 A Milwaukee Police Department squad crashed on October 13 following a pursuit of a vehicle that was stolen in a strong-armed robbery.

Officers from District Four spotted the Pontiac G6, stolen from the 900 block of East Wright Street on October 12, near North 62 Street and West Thurston Avenue just before 8:00 PM on October 13.

Ten minutes later at the intersection of North 20 Street and West Chambers Street, the suspect’s vehicle struck a minivan and then struck a tree.

The three occupants inside the suspect’s vehicle fled on foot and are still being sought by Milwaukee Police.  Two males inside the minivan were transported to the hospital with non-life threatening injuries.

In the same intersection, a pursuing squad from District Seven involved in the pursuit struck a car.  A male officer was transported to the hospital and it’s anticipated he’ll be released soon after undergoing treatment for non-life threatening injuries.  The other male officer in the squad car refused medical treatment at the scene.  A man and woman in the car that was struck by the squad complained of non-life threatening injuries and were transported to a local hospital.  Unrelated, in another incident, in the 4400 block of N. 26th St. a 19 year old Milwaukee man was shot during an incident while fighting.  The gun shot is non life threatening.  The fight involved several other males all of whom fled after the shot was fired.  The matter is also currently under investigation.