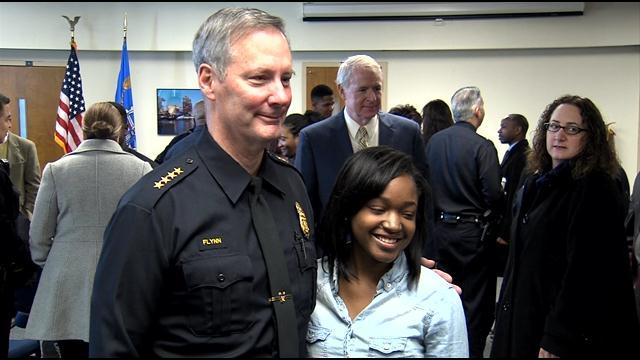 Milwaukee becomes the first city in the nation to get its police department involved in a transitional jobs program.

On Wednesday, March 4th, 17 young people were sworn in as Police Ambassadors.

The program aims to help those who are interested in pursuing a career in public safety or criminal justice get their foot in the door.

Police Chief Ed Flynn says it's an all around benefit to the community and those directly involved.

\"We recognize we have communities in crisis,\" said Chief Ed Flynn. \"We recognize we've got neighborhoods challenged by crime and we want to do something about it and these young men and women want to and we're going to give them the opportunity to learn about it.\"

This law enforcement aspect is part of a larger umbrella program designed by Mayor Tom Barrett to get more people who are out of work on the path to full time employment.

\"We know it's easier to get yourself in a positive state of mind if you're going to work and have money in your pocket,\" explained Mayor Barrett. \"And you look better to a potential employer.\"

The city started out with the Departments of Public Works and Neighborhood Services and then the Police expressed interest.

\"We want to improve our police community relations,\" added the mayor. \"We want to have young people who can work with the police. We want members of the community to understand what the police department does.\"

Kalin Welch joined the program after being in the army.

\"I'm Military Police and I just want to deal with criminal justice,\" Welch told CBS 58 News.  \"I want to give back to my community.\"