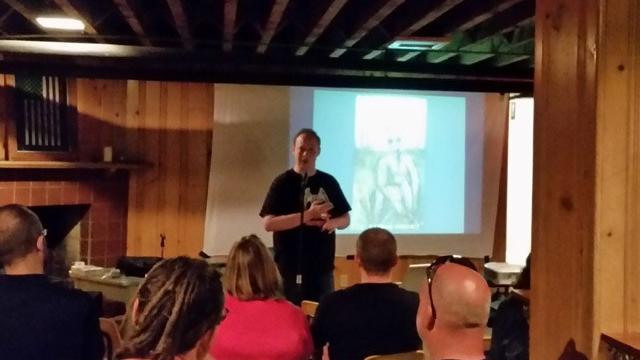 The Milwaukee Paranormal Conference is celebrating its return October 15th and 16th.

The first conference happened in June 2015 at the Irish Cultural & Heritage Center.

It has now grown in popularity and required a larger venue.

The UW Milwaukee Student Union will host a variety of symposiums on Saturday and Sunday with a special Raven's Ball at the ICHC, the original location of the conference, on Saturday night.

For the true believer or a casual observer the conference is affordable at just $10 a day with special packages that give you reduced rates and commemorative items.

The Raven's Ball which will feature non-stop entertainment also a deal at just $8.

Author Tea Krulos is the founder of the conference. The author of "Monster Hunters" which is published by Chicago Review Press visualized a small conference to showcase people and subject matter he had written about in his book.

The conference idea quickly snowballed and became an event with an enthusiastic support base. It immediately became clear that a year two event could be built into an even larger conference.

-Special guests being flown into Milwaukee for 2016 include:

Loren Coleman: the world’s leading cryptozoologist. Cryptozoology is the study of mystery animals like Bigfoot, Lake Monsters, Chupacabras, etc. Loren has written dozens of books on the subject, appeared on shows like Unsolved Mysteries and Coast-to-Coast, and curates the International Cryptozoology Museum in Portland, Maine. In his long career of traveling and giving talks, this is his first Milwaukee appearance.

Chase Kloetzke: The Deputy Director of Investigations and Special Case Manager for the Mutual UFO Network, Chase has been with the group since 1996. She’s actually taking a direct flight to Milwaukee from a case she’s investigating in Peru!

Elizabeth Saint: Inventor of the Ghostly Gadgets line of ghost detecting equipment and star of Destination America’s Ghosts of Shepherdstown.

-In addition to the guests being flown in, we have many speakers from Southeastern Wisconsin and the Midwest. Be sure to check out Allison Jornlin’s talk on weird moments in Wisconsin history, and talks on strange cases in Wisconsin by Linda S. Godfrey Chad Lewis. Most of our panels are also on Wisconsin lore, including “Searching for Wisconsin’s Sasquatch” and “Wisconsin’s Wildest Urban Legends.”

-Saturday night after the conference will be celebrated with the Raven’s Ball, a masquerade ball style party at the Irish Cultural and Heritage Center. Features performances by Dead Man’s Carnival, Quasimondo Theater, Sunspot, Tamarind Tribal Belly Dance, Gnarrenschiff, Subspace, and a costume contest.

Krulos was a special live guest Wednesday on the CBS 58 News at 4.

He says the conference is for the true believer as well as those just dipping their toes in the water.

The Official After Party of  the Milwaukee Paranormal Conference is the Raven's Ball on Saturday at 8 p.m. at the ICHC just west of the Marquette University Campus near 22nd and Wisconsin.

Sunspot, legendary band from Madison, the pop royalty of the paranormal

Gnarrenschiff, a eastern European style folk trio will be providing music for a special performance by Tamarind Tribal Belly Dance!

DJ trio Subspace is closing the show out.

There will also be what's called a mega costume contest, presented by Alcoholmanac, with prize packs in several categories.

There will also be a lounge area with Tarot Readings By Skully Sati and spiritual intuitive and medium Michele Blaylock.