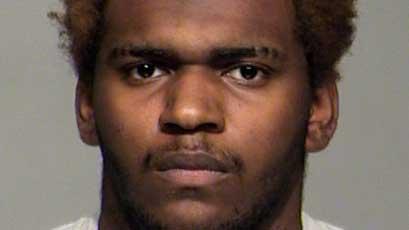 Dalvin Golden has been charged with Second Degree Reckless Homicide in the October 3 fatal stabbing at 6174 West Forest Home Avenue.

The victim, Kiante Kelly, was found by Milwaukee Police lying face down in the apartment.

Golden was found lying at the mouth of the apartment door.

Both were treated for their injuries.

A witness said she heard screaming and opened the door to find Golden lying on the ground yelling that someone had shot his fiancé.

When she approached she found a second man lying on the ground.

Initially, Golden refused to speak with Police and acted like he was unconscious, according to the criminal complaint

Golden complained of medical distress but Police believed he was faking the symptoms.

Golden told Police he awoke to sounds of Kelly calling for help, and he observed Kelly falling to the ground.

He said he was attacked by a white male wearing a gray skull cap.

Later in interrogation, Golden said Kelly brandished a knife and he tried to disarm him. During the struggle, Kelly was stabbed.

Kelly attempted to leave the residence but Golden would not let him.

Kelly attacked him and Golden stabbed him again.

Golden fled the residence and discarded the knife. He then re-entered the apartment, cleaned his wounds, and laid next to Kelly until Kelly stopped talking.

In another interview, Golden acknowledged that Kelly never possessed a knife and Golden introduced the knife into the dispute.

He further said, while Kelly was lying on his stomach, Golden stabbed Kelly again.