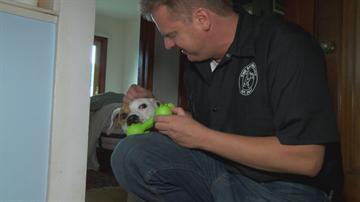 \"It's an issue that's very near and dear to a lot of people's hearts,\" Mangold said.

June 10, 2011, Milwaukee Police and animal control teams seized six pit bulls from a home on 27th and  Hampton.  They found steroids, treadmills and blood-splattered walls inside.  The owners were charged with federal dog fighting crimes and MADACC  took the dogs into its custody.

But nearly 1,000 days later, the court cases continue to drag out and Mangold says MADACC refuses his help.

McDowell knows Mangold means well, but because the defendants still technically own the animals, MADACC can't let him near the dogs.

\"It does effect them psychologically, there's absolutely no question about that and nobody's  debating that point, but it is what it is,\" McDowell said.

McDowell says the 30 or 40 \"court case dogs\" MADACC keeps -- about 20 percent of its total space --  get some human interaction when moved to different kennels for cleaning.

\"It's minimal, there's no question about that, but again, we do what we can as far as keeping the  animals happy,\" McDowell said.

That's not acceptable to Mangold, who plans to ask for Milwaukee leaders to intervene.

\"It's a matter of being able to accommodate their needs as dogs as this process goes on,\" Mangold said.

The Milwaukee Common Council could draft a resolution to allow people into MADACC to play with and care for the dogs, but so far, Mangold says most aldermen won't listen or don't see it as a pressing issue.

More info about Mangold's cause here

You can find more info about MADACC here