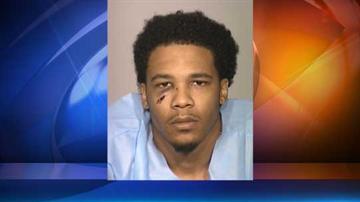 MILWAUKEE -- New details have emerged about a wild shootout between a Milwaukee man and Milwaukee police Saturday, where at one point, an officer's gun jammed while trying to return fire, and evidence showing the suspect was intoxicated during the incident.

He is also charged with possession of a firearm by a felon, two counts of endangering safety by use of a dangerous weapon, bail jumping, attempting to flee an officer and disorderly conduct.

The situation began to unfold when police saw Cruz speeding and driving erratically at 10 a.m. Saturday near 48th and Fond du Lac Avenue. Cruz was initially cooperative when an officer pulled him over, but sped off when the officer returned to his car to run a check on Cruz.

Cruz caused an accident when he fled, and officers were able to catch up with him at Roosevelt Drive and Fond du Lac Avenue. An officer placed his car on the driver's side of Cruz's car to block him in, but Cruz slid to the passenger side of the car, jumped out and ran west on Roosevelt Drive while shooting several rounds from a semi-automatic pistol into the air.

Police tried to follow Cruz, but lost sight of him in the 4600 block of Keefe Avenue.

Contractors working on a nearby home flagged down officers and told them they had seen Cruz running with a gun. Cruz pointed the gun at one of the men, then pointed it at an officer and started shooting.

The officer said he heard gunshots and immediately hit the ground with his gun drawn, but when he pulled the trigger to return fire, the gun malfunctioned.

Investigators later found a bullet hole in the officer's car, proving that Cruz fired directly at the officer.

Cruz ran off and tried to hide in a nearby yard. The homeowner saw him and told him to leave, and he did. Shortly after, Cruz shot five rounds at a second officer in an alley near Keefe Avenue and ran as the officer returned fire.

Cruz encountered a third officer in the same alley, and immediately began firing. That officer took cover, and Cruz turned and fired at a fourth officer.

The third officer shot 9 rounds at Cruz, who fell to the ground but continued to shoot until the gun ran out of bullets. Cruz threw the gun once he realized it was empty and was taken into custody and treated for non-fatal gunshot wounds to his shoulder and leg.

Police used video surveillance from a homeowner to assist in their investigation. The video shows Cruz running from the accident scene and removing what police believe was a gun from his wasitband, and shows an officer shooting at Cruz, then later shows Cruz being removed from the scene on a stretcher.

Cruz was intoxicated during the shootout, with a blood draw showing a blood-alcohol concentration of 0.16, twice the legal limit for driving.

Cruz pleaded guilty to possession of cocaine, second offense, in July and was told he could no longer carry firearms.

He's also believed to be a suspect in an armed robbery at a Citgo gas station on 67th and Villard Avenue. He faces one charge of endangering safety by use of a dangerous weapon in connection to that incident.