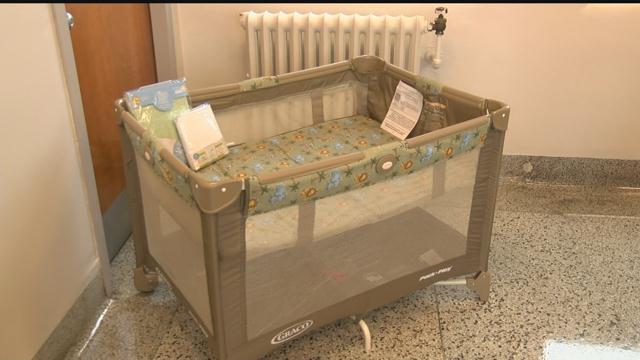 A one-year-old girl sleeping with two adults on the north side is found dead Tuesday morning.

The Milwaukee County Medical Examiner's office believes it's a co-sleeping death. Initial reports state the girl was on a partially inflated air mattress with the adults at a home near 15th and Nash.

This is the third co-sleeping death in the City of Milwaukee this year, and there's a desperate attempt to get the word out about resources for families who don't have a crib or separate bed for their child. Health officials said an average of 10-15 babies die a preventable death because of unsafe sleeping environments.

She said sharing a bed with a parent or sibling is dangerous too.

"Obviously an adult is a lot heavier than a small infant and when the air mattress sinks down, that infant rolls underneath the parent," said Milwaukee Police Officer Dan Pierce.

Families in need can get the proper baby sleeping tools through the city's Cribs for Kids program. After education and training, they get a pack and play for free, complete with a firm mattress, fitted sheet and a halo sleep sack.

"It's a blanket that won't cause a suffocation risk because it won't go over their face," she said.

Tuesday, the health department expanded the program with the help of Milwaukee police.

Officers in districts two and three received training, so when they respond to calls, they can refer families who need a crib. The effort is already underway in district seven. Officer Nat Tharpe recalled a previous case.

"The child actually died at the scene," he said. "It was a co-sleeping situation and it's a case where if they had a crib or a pack and play, it could've possibly saved a child's life."

With its partners, the health department gives out about 1,000 cribs a year. A health nurse follows up with families a week later to make sure it's being used correctly.

Officials want you to remember the ABCS of safe sleep, meaning infants are safest when they're:

A -- Alone
B -- On their back
C -- In a crib with no bumper pads, pillows, blankets or soft objects
S -- In a smoke- free environment

Families who need a crib should call the City of Milwaukee health department at (414) 286-8620. The Cribs for Kids program is funded by grants and online donations. Click here if you'd like to help.