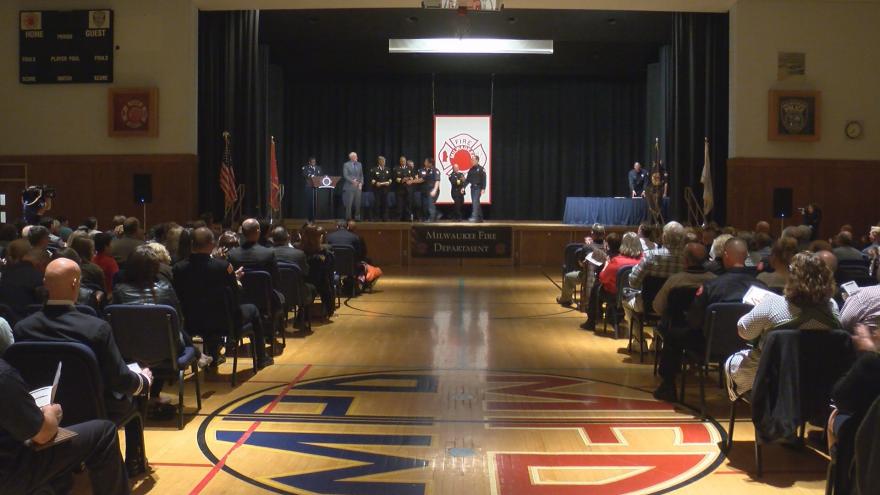 Milwaukee firefighters, EMS, and regular citizens were honored for their selflessness and going above and beyond the call on Thursday, October 12.

More than 65 men and woman were honored in a ceremony at the Milwaukee Training Academy for their efforts in saving lives throughout our community.

One local family was present to personally thank their heroes who helped during their emergency.

It was February 15th when Craig Frizzell was suffering from what he and his wife Brooke thought was a usual migraine.

“The difference in this case was that he was having trouble walking and with his coordination,” explained a first responder during the ceremony.

Once on scene, first responders noticed his heart beat was alarming slow.

“They gave him a drug called Atropine, which if you’re not a paramedic you really don’t realize how rarely we use this particular medication,” Continued the emergency responder as he addressed the crowd.

Frizzell was rushed to the hospital where doctors found a cyst on his brain blocking the cerebral spinal fluid.

“The neurosurgeon says he would have not survived the night,” explained Brooke. “I was 13 weeks pregnant at the time.”

As of seven weeks ago, the couple had their first child, baby Maggy.

It’s because of those firefighters and paramedics first response who the family says they’re thankful for.

“Everyone is doing great,” says Brooke. “Thank you very much for your quick response to my call.”