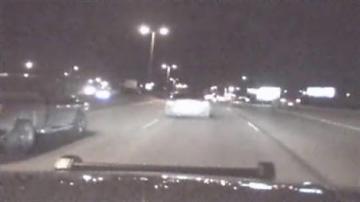 MILWAUKEE-The Milwaukee County Sheriff's Office has released video of a high speed pursuit of a suspected drunk driver in hopes of located the person and or the vehicle.

In a written statement Thursday night the sheriff's office said the pursuit occurred on Tuesday, March 25, at about 10:40 p.m.

\"A sheriff's deputy attempted to stop a violator he suspected of drunken driving. The vehicle cut in front of the squad at an unsafe distance, then accelerated to speeds over 95 mph on eastbound I-94 near 35th Street to I-43 northbound past Capitol Drive.

The subject deviated from his lane and changed lanes multiple times without using a turn signal, and did not stop for the deputy, leading to a high speed pursuit of less than three miles before the deputy terminated the pursuit. Deputies exercise restraint if conditions could possibly put the public in danger. The high traffic volume necessitated terminating the pursuit.\"

The sheriff's office is asking the public to call with any information about this vehicle and the driver. The vehicle is either a gray/silver Nissan or Toyota four-door sedan. The most notable descriptor is that it has Virginia license plates.

If anyone has information related to this case, please contact the Sheriff's Office Communication Center at (414) 278-4736.