Milwaukee County Sheriff on "slap on the wrist" sentencing 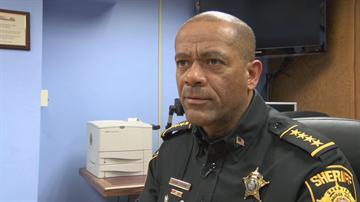 MILWAUKEE-Sheriff David Clarke doubling down in his assertion that lenient sentencing was part of the problem that allowed for last week's shooting inside Children's Hospital.

In an interview Wednesday with CBS 58 News, the sheriff revealed that 22 year old Ashanti Hendricks had a juvenile record as well as several drug and a weapons offense as an adult.

Hendrick's was wounded after allegedly pulling a gun on Milwaukee Police who tried to arrest him near the Neonatal Intensive Care Unit.

Police received a phone call about Hendricks' whereabouts. He was wanted for failing to show up for sentencing on a gun possession conviction.

The sheriff says the case represents a small, felonious population that is continually released into the city of Milwaukee.

\"You see them re-arrested over and over again,\" said the Sheriff, \"only to be slapped on the wrist and put back into these already stressed neighborhoods that don't have the resources and don't have enough police.\"

\"There is overcrowding in the jail, there's an expense to incarcerating people and it appears  that he (Hendricks) had not had convictions for violent offenses in the past.\"

It should be noted that even if Hendricks posted bail for the charges from the Children's Hospital Case, he has been remanded into custody because of his failure to show up for court in the prior case.

The sheriff has spoken on his concern about sentencing in Milwaukee County for several years.