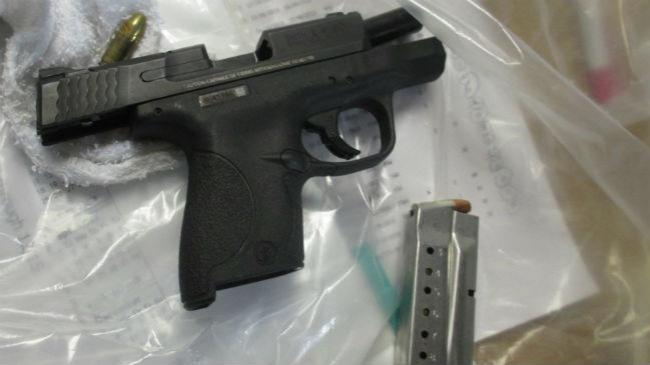 The county says the gun found in inmate laundry was reported stolen. \"Had the wrong person gotten his hands on this gun, this situation could have ended much differently,\" County Executive Abele said. \"I'm very thankful that is not the case and that staff responded quickly and appropriately to the situation.\"

Sheriff David A. Clarke Jr. highly criticized County Executive Chris Abele for being more concerned about a political opportunity than improving safety for inmates and employees in the Milwaukee County Criminal Justice System. Sheriff's officials were notified by House of Correction staff that a gun was found in a laundry bin in the HOC facility in Franklin by an inmate worker. Sheriff's detectives were sent to investigate. Statement from Sheriff Clarke:

We are trying to determine how this firearm got into the secure portions of both of these jail facilities. This is a serious breach. My goal is to get to the bottom of it to tighten security inside these confinement facilities. Abele has seized on this serious situation as a political opportunity. I find that shameful.

Here's what we know so far. An individual was arrested by Milwaukee police officers on the street. He was wanted on a warrant. He had on a walking boot-type cast and complained of leg pain to the MPD officers. MPD conveyed him to the hospital because of this. It has not been determined what treatment he underwent. Officers on the street are expected to do a search incident to an arrest, but should not be removing body casts or prosthetics as that should be done by medical personnel. He was conveyed to the Milwaukee County Jail and booked in. He posted bond and was released.

Detectives are trying to determine how he was able to secrete a weapon inside a walking cast. This will cause us to reevaluate our search policy in cases where subjects have medical devices. Our goal is to examine things that have not happened before, learn from them and adjust our policies. Abele instead is more concerned about political gain and attempting to embarrass Milwaukee police officers, hospital personnel and corrections officers, who obviously did not find the weapon inside the walking boot.

It was an inmate worker who found the firearm at the House of Correction, but Abele was quick to give his employees credit. I want to give the inmate credit for doing the right thing when he found the weapon.

I'm not surprised at the smallness of Abele. This is a guy who spent $250K of his personal wealth to try to defeat me in my reelection last fall, including $10K to a known political hack to try to smear me.