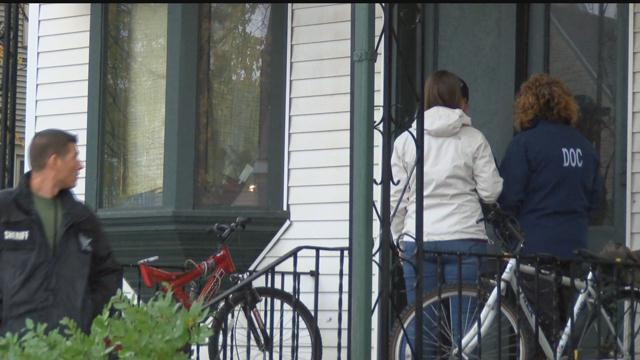 Although Milwaukee's nasty Halloween weather may have stopped some families from taking their children out trick-or-treating, it didn't stop Milwaukee County authorities and workers with the Wisconsin Department of Corrections from heading out to the streets.

Halloween is the day of an annual check on sex offenders in the area - making sure that they don't have candy or other decorations that could entice children.

Rachel Conway, a probation and patrol agent with the department of corrections, monitors a number of the convicted sex offenders - checking on them weekly.

All who got visits on Saturday are under active supervision, Conway said.

Many were convicted of crimes like 1st degree sexual assault - forced intercourse with a child.

"Prior to doing the visits they do sign a contract that they will not participate in any Halloween activities. So they're aware that they shouldn't be. And they're also aware that they may receive a home visit," Conway said.

Each team handled about 30 packets outlining the different sex offenders getting visits.

Detective Todd Rosenstein - with the team CBS 58 rode along with - did not find any violations through the early afternoon.

Year-to-year, however, that's not always the case, Rosenstein said.

"Last year, one of our first houses we went to the gentleman had a child in the house. The child actually answered the door," Rosenstein said.

"Some of them post signs, some of them don't. It's not a necessity that they post signs about not being able to trick-or-treat but it's a good idea," Rosenstein said.

If authorities approach a home and no one answers a bench warrant is issued for the person who is supposed to be there.