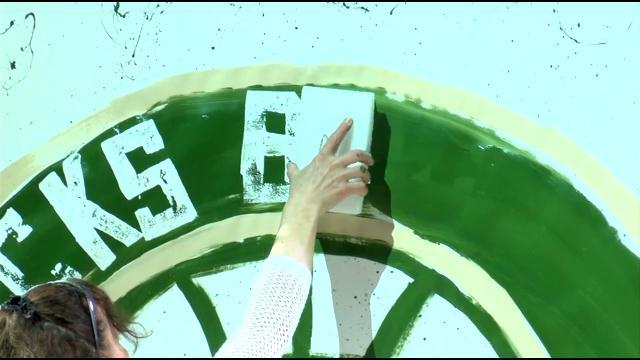 A lot of fans flooded the BMO Harris Bradley Center tonight to see what the playoff-bound Milwaukee Bucks will look like next season.

The watch party had an awesome half time show with showing the team's new logos.

It was the moment hundreds of fans waited for Monday evening, the unveiling of the Milwaukee Bucks new logos.

All three of them bring a different feeling, highlighting basketball, the City, and the State of Wisconsin.

\"In sports I think you need to have an edge and having three of them is really cool. So it will be kind of edgy competitive fresh new exciting”, said Bucks fan Ryan Vanderloop. “There's a lot to change and Milwaukee with the new Bucks and the new development.\"

At Monday night's watch party for the unveiling, Bucks stars from the past and present also weighed on the new look.

\"The environment is full of people middle-class hard-working”, said Bucks player Jabari Parker. “I'm not sure how it was back then but I know in Chicago there are a lot of factory workers and they seem to do well so I just want to speak up for the fans.\"

\"In my opinion I think is the best logo since I was here 93”, said Former Bucks player Vin Baker. “I love the colors. I think what it represents the water the green. Green is my favorite color anyway. I like the deer. It looks meaner. I think the guys are going to love it.\"

The Bucks plan to unveil their new jerseys in the summer after the playoffs.