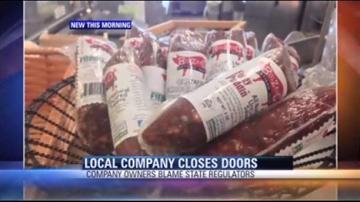 MILWAUKEE -- Just weeks after a recall stripped its salami from store shelves, Bolzano Artisan Meats says it has to close its doors for good--and the Wisconsin Department of Agriculture is to blame.

The salami that was recalled, however, was incorrectly labeled with the Cooperative Interstate Shipment program version of the USDA Mark of Inspection, which requires federal acceptance into the program.

Bolzano Artisan Meats LLC is not part of the CIS program, meaning the company cannot sell meat labeled with the CIS program version of the USDA Mark of Inspection.

The labeling mix-up meant nearly 5,000 pounds of otherwise safe to eat meat had to be removed from store shelves and destroyed.

Husband-and-wife owners Scott Buer and Christin Johnstone-Buer say the Wisconsin Department of Agriculture is at fault, and accuse the state agency of bullying Bolzano and small stores that carry Bolzano products.

\"Wisconsin Dept. of Agriculture ordered all production and sales at our company to stop and is leading to the destruction of around $50,000 worth of salami that the USDA, the highest food safety authority in the nation, declared to be safe and wholesome,\" the owners said in a statement about the business's closing.

Scott and Christin have started a website seeking donations for legal fees to fight their case.

\"Food safety should not be replaced with politics and personal issues, and small, independent food processors in Wisconsin and the US are leading the way for a more sustainable way of living and eating, creating jobs and rewarding small farms that do things the right way,\" they said.

Look for more updates on this story from CBS 58 News.