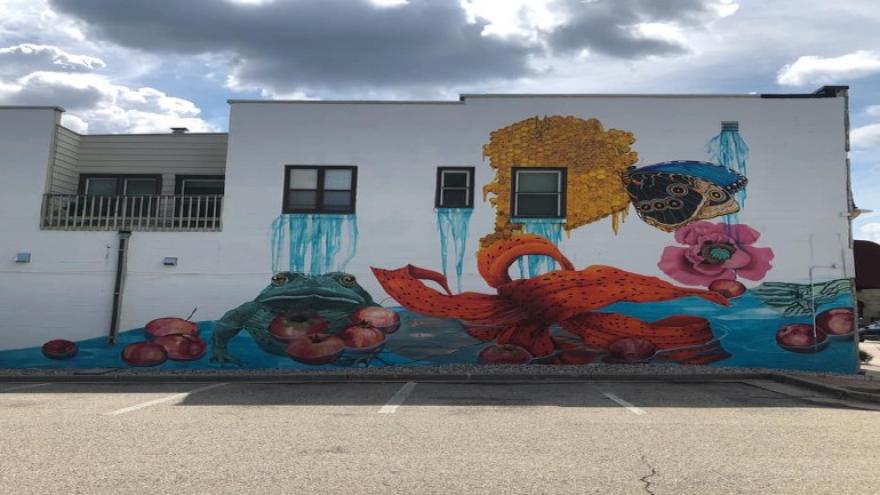 In total, there will be eight new artworks installed in various sites around downtown Menomonee Falls. The murals will all be different one another, including larger-than-life candy jars, stone age-inspired bird design and an idyllic landscape. The subjects and styles of the new murals are being kept secret, in order to engage and delight the public, according to officials.

“We are so excited by the community embrace of the murals – it is literally the talk of the downtown," Downtown BID director Felicia Reichard said. "Business owners are frequently being asked for directions to the ‘candy wall’ or where the next mural location will be, for example. Their enthusiasm is really contagious!”

All murals are within walking distance from each other.

According to the news release, artist Czarnecki recently completed a large-scale painting on the side of local business Poppy & Thyme, located at N88 W16726 Appleton Avenue. This is her fifth major mural in the greater Milwaukee area.

Officials also stated Kaems will begin his painting this week on the north-facing wall outside of H&R Block, located at N88 W16624 Appleton Avenue. The subject of his composition has not yet been revealed, but Kaems is known for his high-energy compositions and well-crafted visual effects with spray paint.

The first 2020 mural installed in Menomonee Falls was by Houston artist Anat Ronen, who painted a monumental and hyper-realistic scene of candy jars which appear to be inset into a shelf in the parking lot of the Dunne Commercial building located at N89 W16785 Appleton Avenue.

In July, a second mural at the corner of Main Street and Appleton was created by River Falls artist and art teacher Taylor Berman.

Three Menomonee Falls-area artists will showcase their mural-painting talents in an alley walkaway at N88 W16712 Appleton Avenue. Officials say two of the artists have already begun their work: Liz Hoover, and Kathleen Murphy Willer, and next week will be artist Madelyn Mascotti. The alleyway will eventually be lit with café lights.