Millions of chickens, thousands of pigs died during Hurricane Florence 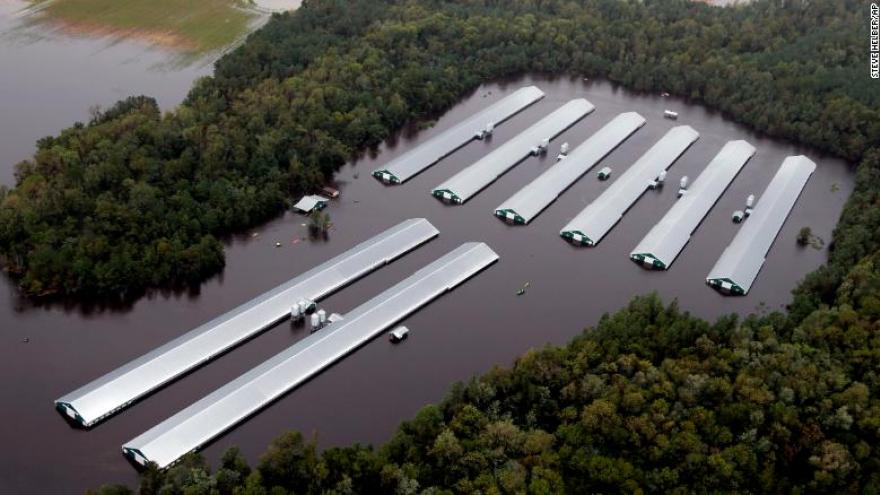 Some 3.4 million poultry birds were killed in North Carolina, according to the state Department of Agriculture & Consumer Services. That exceeds poultry losses two years ago in Hurricane Matthew, it said.

Sanderson Farms, one of the largest poultry producers in North Carolina, lost 1.7 million chickens on its farms, and 60 of its 880 production chicken broiler houses have flooded, the company said in a news release.

In addition, about 30 Sanderson farms that together house more than 6 million chickens around hard-hit Lumberton, North Carolina, remain isolated by floodwater and out of reach of feed trucks, Sanderson said, noting that the number of dead chickens could increase.

Sanderson Farms has approximately 20 million head of chickens and doesn't expect this loss to affect operations, it said.

Commodities hardest hit, according to Weathers, are:

• Cotton: These farmers will suffer the greatest impact because of timing. Heavy rain and wind soaked the cotton and "literally knocked it out of the bolls."

• Peanuts: Peanuts don't suffer much from wind because they grow underground, but water on fields is a problem. Peanuts are now ready to be dug, then have to lay on the fields to dry before harvest. If the ground stays wet, that's tough.

• Hemp: The plants are big, and the stems are small, so they've "literally blown over."

• Livestock: The main concern is finding a way to dispatch feed trucks in flooded areas.