Michigan cop dies after he was shot in the head 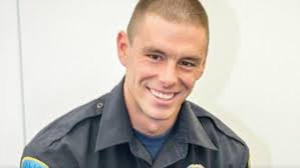 (CNN)A Wayne State University police officer died Wednesday from a gunshot wound he suffered the previous night in Detroit, according to the university president.

Officer Collin Rose, 29, had been on life support after he was shot in the head during a police stop.

"This is a tragedy felt by all of us," university President M. Roy Wilson said in a statement.

"Please keep Collin and his fiancée and family in your thoughts and prayers. Collin served Wayne State with distinction, and we owe those he left behind our deepest sympathies and our strong support."

He was the first Wayne State University officer to die on the job, and the fifth police officer shot in the United States in less than a week.

A suspect, whom police also described as a person of interest, is in custody but has not been charged, according to university police Chief Anthony Holt.

Rose was on a neighborhood patrol near the Wayne State University campus, which has recently seen a rash of auto crimes. He saw a subject on a bike approach the area, and he called for backup, Holt said.

When the backup officer arrived, he found Rose with a gunshot wound to the head. The circumstances surrounding the shooting are unclear.

"I can't sugarcoat this," Wilson said at a press conference after the shooting.

"This is a tragedy of immense proportions, something that Wayne State fortunately rarely has to experience."The person in custody is being held on outstanding misdemeanor warrants, one from 2011 and another from 2014, according to Holt.

Wayne State University police encountered the suspect a few years ago. In one incident, the suspect was blocking traffic in the middle of the street and refused to leave. There was a scuffle with police, and one of the officers involved suffered minor injuries, according to Holt.Rose was a five-year veteran of the police force and worked as a canine officer.

"Not only is he a canine handler, he's very, very involved in the community. He goes to schools. He gives out demos," Holt said. "He's just an outstanding, proactive officer."

A couple of months ago, Rose organized a memorial for slain Detroit police Officer Patrick Hill. Rose named one of his dogs, Wolverine, after Hill, according to Holt. Rose was one credit away from finishing his master's degree in police administration from Wayne State University. He was engaged to be married in October 2017.

The gun used to shoot Rose hasn't been found. The Detroit office for the Bureau of Alcohol, Tobacco, Firearms and Explosives is offering a $5,000 reward to anyone with information regarding the weapon.

This shooting comes after a violent few days for police officers across the country. On Sunday night, four officers were shot while on duty, one fatally.