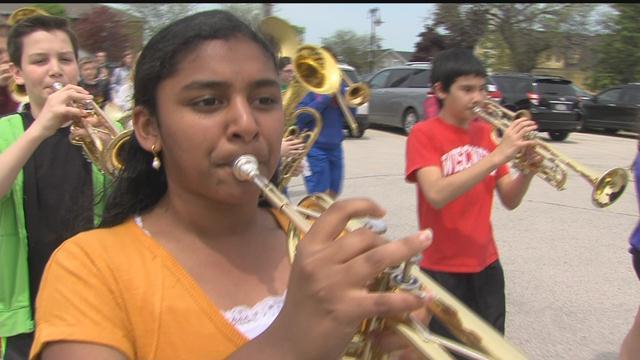 The 2016 Scripps National Spelling Bee starts this Wednesday in Maryland and a 7th grade student from Menomonee Falls will be representing the badger state.

13-year-old Veronica Goveas attends North Middle School. She plays the trumpet and likes listening to Taylor Swift. This weekend she's headed to compete it the biggest spelling bee in the country.

"We knew she had an aptitude for reading and spelling but this is all a surprise," Joseph Goveas, Veronica's father, said.

"In 5th grade my teachers gave me the opportunity to participate in our school spelling bee. And I ended up winning that and I was like 'Maybe I should give this a serious try'," Veronica said.

Her efforts led to her winning the 2016 Wisconsin State Spelling Bee which helped qualify her for this year's Scripps National Spelling Bee.

So at that level, what's the strategy?

"I just try to pick out bits and pieces inside that word and try to really dissect it and see if I can find any roots or parts of other words that I know or that I've seen before," Veronica said.

"There are certain mannerism where you know she's confident about the word...sometimes she's just got a blank stare and you know she's got to really try hard to get this right," Joseph said about his daughter's stage presence.

"I try to like see if I can find a familiar face or stare into a blank space. Something like that. To help me to calm down," Veronica said.

"When she's spelling I look down so she's probably seeing my hair," Joseph said.

But it might be more difficult to pick out her dad in the larger audience which will include ESPN's cameras.

Win or lose, Veronica describe all this work as 'just another hobby'.

"Spelling will definitely help me to become what I want to be when I grow up. I want to be a doctor like my dad," Veronica said.

"Most of the time we don't know if she knows it or not. I know she's going to give it her best try," Joseph said.

The preliminary rounds of the 2016 Scripps National Spelling Bee will start Wednesday morning at 7 am CT.