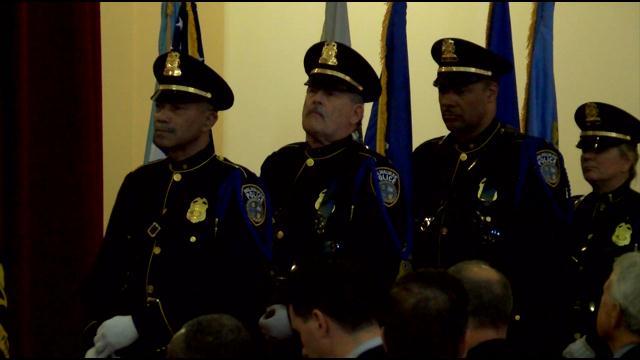 City and Law enforcement leaders took some time to thank the men and women of law enforcement and their families, in particular those who made the ultimate sacrifice.

Katherine Moczynski spoke in front of the crowd on behalf of her family and in honor of her late husband, Milwaukee Police officer Rosario Collura, who was killed in the line of duty 30 years ago.

\"March 19th, 1985 changed our lives forever, said,\" said Moczynski during her speech. \"Rosario Collura and Leonard Lezneski never made it to the end of their shift. Both were shot, never having a chance, they died that day.\"

\"It was very difficult. That morning, the last thing I remember when my dad was leaving is he was going down the stairs and asked me to give him a kiss and I said I was a little too tired, I'd give him one when he got home. Well, I never got the opportunity to do that so that's one of my biggest regrets,\" said Helena Ewer, who was 12 when her father was killed.

The memorial is held year after year, so that officers like Rosario Collura are never forgotten.

\"There are 20,000 people in the law enforcement memorial ... 60 of those names are from Milwaukee. The threat of death is sadly a present reality in the lives of police officers and their families,\" said Milwaukee Police Chief Ed Flynn.

A reality that's even harder for those who live through it. However, ceremonies like the ones held at the Milwaukee theatre, bring a sense of peace.

\"It means so much for us to stand in front of all of our officers,\" said Ewer.
Share this article: