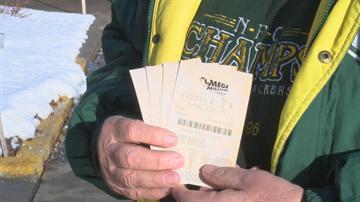 NEW BERLIN -- You would be hard pressed to find someone not playing the Mega Millions lottery Tuesday.  The jackpot jumped to $636 million Tuesday morning, becoming the second-largest ever.

\"When it's big like that, especially since I'm out of work, I thought, 'Hey, why not,'\" Muskego's Cindy Liebel said.

\"I'd have a tropical place, then I might have a place up in the mountains, then we'd have a place here,\" fellow lottery player Steve Cooper said.

They're not alone.  The Wisconsin Lottery expects more than $3 million in sales since the last drawing Friday alone.  About half of those profits go right back into your pocket.

\"We kinda like the 6-3-6 number, it kind of rolls off the tongue,\" Wisconsin Lottery Director Mike Edmonds said.

Edmonds says whether you play or not, lottery sales go toward lowering your property tax bill, something most don't realize.

\"I don't think most people do,\" Edmonds said.  \"But I think they'd probably notice if that credit was gone from their property tax bill.\"

Revenue from lottery sales also gets paid in millions back to retailers like gas stations.  Those stores see big upticks during massive jackpots.

\"They're selling Mega Millions, sure,\" Edmonds said.  \"But they're also selling a soda, coffee, a bag of chips, maybe even a pizza or something like that.\"

The most important thing to do if you win: sign your ticket.  It guarantees you will get the dough.  Then contact the lottery office in Madison.

About half of all Wisconsin sales will go toward a discount over $100 in your upcoming property tax bill.