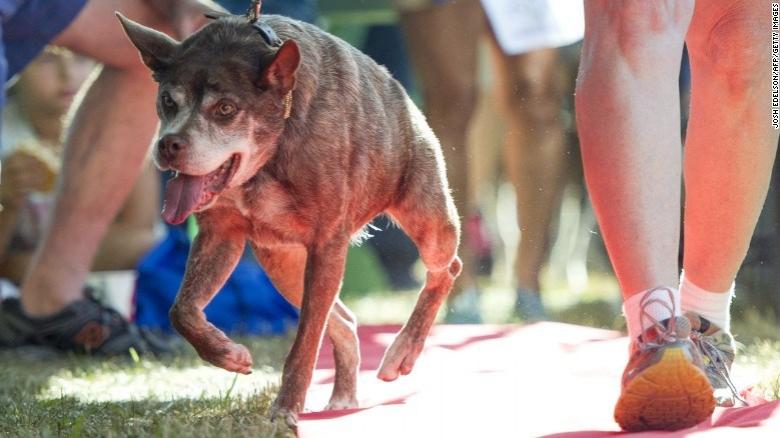 The 10-year-old pitbull-Dutch shepherd mix won the dubious title from a pool of 27 underdogs at the annual World's Ugliest Dog contest at the Sonoma-Marin Fair in Petaluma, California.

The judges score the dogs on first impressions, unusual attributes, natural ugliness, personality and audience impression, according to the event's website.

\"We aren't interested in lineage, it's the inner beauty and personality that shine in our World's Ugliest Dog contest,\" said Karen Spencer, marketing director for Sonoma-Marin Fair, which organizes the event.

The first runner-up was Sweepee Rambo, a Chinese crested chihuahua, who takes pride in her soft freckled skin and blond Mohawk. The second runner-up was Frodo, a 12.5-year-old Chinese crested hairless-chihuahua mix from Sparks, Nevada, who loves to be bossy, according to his official bio.

Because many of the homely hounds, including this year's ugliest, come from shelters and puppy mills, the contest aims to encourage adoption of dogs regardless of their physical shortcomings.

Quasi Modo's owner found him at an animal shelter, according to his biography on the contest's website.

\"Luckily, one of the veterinarians there saw the sparkle in my eyes and took me home,\" his bio says.

He has multiple birth defects to his spine and his back is too short for the rest of his body.

\"In spite of this I still run, play and enjoy life to the fullest.\"

Grown men have mistaken him for a hyena or Tasmanian devil and jumped on their cars to get away from him, \"but once they get to know me I win them over with my bubbly personality,\" the bio says.

\"I love to meet new people and teach them about diversity. I have become a great ambassador for teaching people about acceptance and tolerance for things that are different. You should never judge a book by its cover! Just because an animal or person looks different doesn't mean they're any less deserving of love. It's OK to be different.\"

This was his second year in the contest after making his debut in 2014. His owners brought him to the contest during their honeymoon.

The Spirit Award was presented to Precious, an 8-year-old chihuahua from Petaluma, for visiting disabled veterans with her owner.

\"My mom is a disabled veteran and gives of her time volunteering also. She says there is no 'I' in team, we believe in team spirit and teamwork. She and I love to help others who are down and out no matter what the cause or economic status,\" Precious says in her bio.

Precious has a \"sight issue\" from the vet putting wrong drops in her eye as a puppy, according to her bio. She loves long walks on the beach at sunset, rides in the car with the wind in her face, picnics, table scraps (even though I get a balanced diet), doggy treats and rides in my stroller.

\"I'm living my life with purpose and love.\"