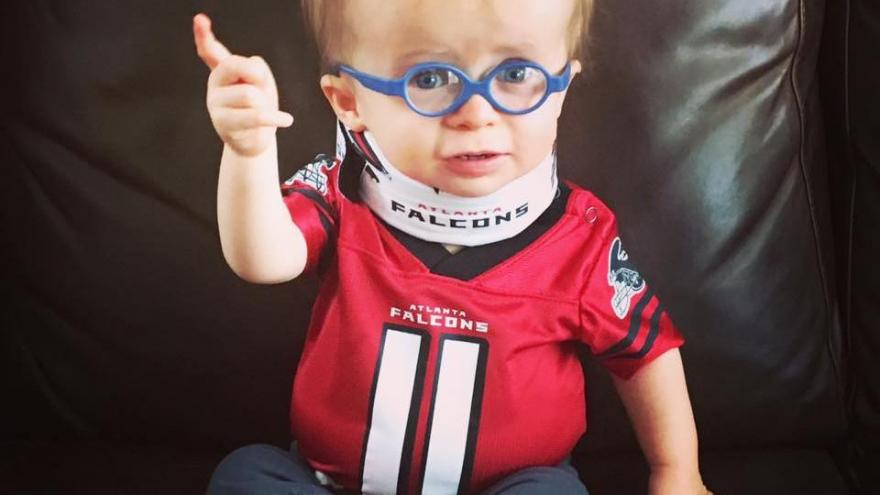 (CNN)When the Atlanta Falcons take the field at the Super Bowl on Sunday in Houston, one of their smallest fans will be cheering them on back home: Wyatt Keeton, a 17-month-old with dwarfism who's melted hearts everywhere.

Children's Healthcare of Atlanta posted Wyatt's photo on its Facebook page shortly after Atlanta advanced to the big game: a picture depicting an irresistibly cute little guy decked out in a Falcons jersey and neck brace, peering out from blue-rimmed glasses and holding up his right index finger.

He was instantly dubbed the cutest Falcons fan of all -- or, as one person wrote, "I just want to squeeze him to pieces!" The post got more than 15,000 likes and was shared over 1,000 times.

Wyatt exemplifies the spirit of resilience, his parents say, much like their hometown football team: the often-maligned Falcons, a franchise that's never won the title in its 51-year history.

Dressed in his No. 11 Julio Jones jersey, Wyatt's cuteness was on full display when his parents sat down to share his story and to speak out for the little people of America.

Asked about a touchdown, Wyatt launched both hands over his head, the referee's signal for a score. Told to show his muscles, he flexed and grunted.

Wyatt, who speaks only a few words so far, wagged his index finger in the air.

'You fight. We fight'

Jennifer and Kevin Keeton tried having children shortly after they married seven years ago, but they struggled to conceive. They turned to in vitro fertilization four years ago. When Jennifer became pregnant with Wyatt, they were thrilled but cautious. The couple had faced heartbreak before, losing two pregnancies in the years prior.

At an ultrasound during the 13th week, the doctor became concerned when Wyatt's long bones appeared smaller than normal. As the couple prepared for a biopsy of the placenta to test for variances or mutations, Kevin leaned in and whispered to Jennifer's belly. "Prove them wrong," he said. "You fight. We fight."

It was Kevin's pledge as a father, "meaning no matter the outcome of this test, you just get here, and we will handle anything and everything that comes as a family."

At 20 weeks, they got devastating news: The fetus had one of two different types of dwarfism, with one being a lethal form that wouldn't be known until birth. He'd come out alive or stillborn.

"Absolutely terrifying," Jennifer said. "You just live the next 20 weeks in total fear. ... Until he was actually here and breathing on his own, we were just terrified."

And even then, there was no guarantee. Almost immediately after he was born via a planned C-section, Wyatt struggled with breathing. The operating room turned into a hub of activity to try to save him.

"That was when it really hit me -- that he may not make it," his father said. "But here he is. And he's thriving. He's just wonderful."

As Dad spoke, Mom picked up a little Julio Jones doll and pretended to speak in the star wide receiver's voice: "I love you, Wyatt. You're my favorite fan!"

Wyatt's condition is known as spondyloepiphyseal dysplasias, a form of dwarfism that affects about one in 95,000 babies. He has a type 2 collagen disorder that causes delayed ossification, or hardening, of his bones. His head is large compared to the rest of his body, so physical activities are extremely difficult. He has not walked or crawled. In fact, he will mostly likely walk before crawling.

"He has physics working against him," explained his mother.

When he was 10 weeks old, they learned that Wyatt had significant spinal cord compression and might have to undergo surgery to correct it.

If there were ever parents suited to help a child with such special needs, it is Jennifer and Kevin. She is a registered nurse at the cardiac stepdown unit at Children's Healthcare of Atlanta Egleston hospital; he works for Medicraft, a company that distributes medical implants and other medical equipment for the spine.

Hoping to avoid spinal surgery for Wyatt, Kevin used scissors, fabric and a hot glue gun to make his boy specially fitted cervical collars. His company donated the adult collars that he used to craft Wyatt's collars. So far, the collars have straightened Wyatt's spine and staved off surgery.

Wyatt participates in weekly physical and occupational therapy sessions to help build his strength, and his mom helps him with an array of exercises at home to further his progression. It's helped with learning how to sit up and lift his head.

His parents also worry about the potential for Wyatt to go blind; retinal detachment in teenage years is something faced by some people with his condition.

Basking in the moment

For now, Jennifer and Kevin, lifelong Falcons fans, soak in the special moments with their only child. He will probably grow to be about 3½ feet tall, but as his mom put it, "he is capable of doing anything like anyone else."

Though he doesn't talk much yet, there is no reason to believe Wyatt will have cognitive delays as he gets older.

Mom and Dad said there's nothing they won't do for their boy. They've joined the Little People of America, a nonprofit that provides support to "people of short stature and their families."

The parents said they've been heartened by the supportive messages ever since Wyatt's photo was spread across the Internet. They've read every message, with Dad being moved to tears.

"When I look at Wyatt now," Jennifer said, "I just see strength and determination and stubbornness and intelligence. He's so smart."

"Brave," Kevin said. "He's one of the toughest kids I've ever met."

As Falcons fans say, he rises up.

On Sunday, Dad and son will sport their Falcons gear and watch the Super Bowl from their home in metro Atlanta. Mom must work a shift at the hospital but hopes to get home in time for the second half.

And if the Falcons need extra motivation, they said, think of the little guy who has been through so much: Wyatt has shown how to win. Why not the Falcons, too?