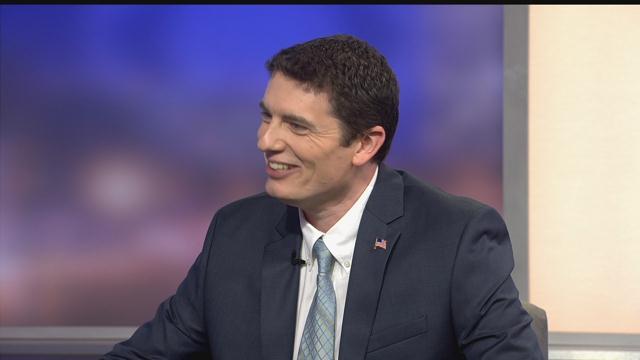 Ryan Solen, Democratic nominee for Wisconsin's First Congressional District, joined us live on the CBS58 News at 4 on Tuesday. The father of four and Army Iraq War Veteran is looking to unseat Speaker of the House Paul Ryan, something that has only happened three times in US history.

Solen knows he has a steep hill to climb, but says he feels driven to try it. "What drives me most in this campaign is that I am tired of seeing gridlock, and I think other people are too. In the last year, how much has really gotten accomplished?"

The candidate tells us he was saddened by the news that Planned Parenthood permanently closed their clinic near Appleton, WI.  Solen accused Paul Ryan of supporting funding cuts to Planned Parenthood, and thus helping limit vital reproductive care to women in Wisconsin. "97-percent of what they do is not abortions, and a lot of their funding is being cut because of abortions," Solen said.

Solen says he is eager to talk about important issues with the incumbent Ryan, but worries that he may never get the chance for a formal debate. "He has not committed to any, in fact he has not responded to our request for a debate... we are going to keep pushing for one," Solen said.

Here is the Solen campaign's full statement on the closure of the Appleton Planned Parenthood branch:

Mount Pleasant, WI- Democratic nominee for Wisconsin’s 1st Congressional District, Ryan Solen, was saddened by the news that Planned Parenthood decided not to reopen their Appleton location because they can’t meet stricter organization security protocols. Wisconsin had 22 Planned Parenthood clinics, including several in the 1st Congressional District. Only 3 provided abortions for women in need of one, including the Appleton location. With that closure, women who are not close to Milwaukee or Madison may need to drive hundreds of miles to get a procedure that they need and have a Supreme Court right to choose to do.

The new security protocols were instituted after last year’s attack at a Colorado Planned Parenthood by a right-wing extremist that left 3 people dead and 9 injured. Planned Parenthood said it would need $300,000 to upgrade the facility to comply with the new regulations.

Due to the critical need for the services Planned Parenthood provides, they don’t turn anyone away because of inability to pay. That is exactly the kind of healthcare service that Ryan Solen advocates for and he supports Planned Parenthood and their mission. To have to close down a needed facility because of fears of domestic terrorism is a travesty.

Ryan Solen’s opponent, House Speaker Paul Ryan, contributes to the problem with his anti-choice stance on abortion. Paul Ryan co-sponsored a bill that would designate “personhood” rights on fertilized embryos, thus allowing Congress or states to circumvent national laws. Fortunately, this attempt at limiting women’s decisions about their own healthcare has failed. The closing of the Appleton Planned Parenthood means a larger portion of the people of Wisconsin are now more limited in securing proper reproductive healthcare at little or no cost.