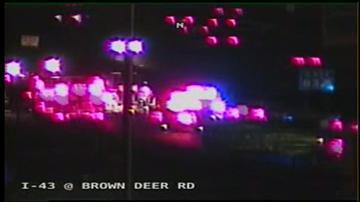 BAYSIDE -- All lanes of I-43 northbound were closed for more than an hour Christmas Eve at Port Washington Road because of a crash.

The Milwaukee County Sheriff's Office says a deputy was attempting to pull over someone thought to be an impaired driver when that driver hit a guardrail. A short time later, several nearby cars also collided for reasons that are still under investigation.

In an update late Tuesday, the Milwauke County Sheriff's Office said that driver was found to be suffering from a medical condition, not OWI.

The size of the scene and number of injuries prompted a full freeway closure.

The North Shore Fire Department said six people were taken from the scene to the hospital.

One included a patient to Children's Hospital.