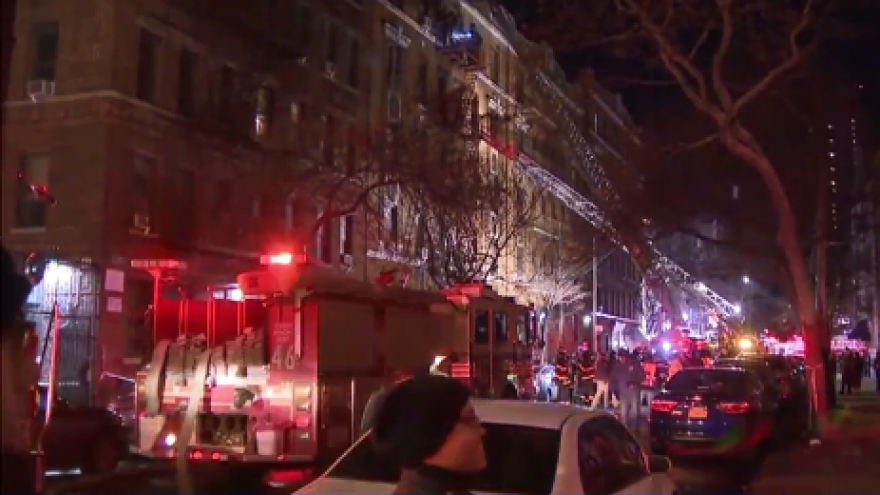 De Blasio said Friday on WNYC that four people are still fighting for their lives following the fire Thursday night in the Bronx.

The New York Police Department says those who died include girls ages 1, 2 and 7, and a boy. His age was not given.

Some residents made it down fire escapes. But the flames moved so fast that many never made it out of their apartments.

Witnesses describe seeing burned bodies being carried away on stretchers and young girls who had escaped standing barefoot outside with no coats.

NEW YORK (CBSNewYork) — Investigators are now combing through the debris to try and find answers as to what caused a fire in the Bronx that left 12 people dead, including four children.

The fast-moving fire started just before 7 p.m. Thursday at a building on Prospect Avenue and 185th Street near the Bronx Zoo, forcing residents outside on one of the coldest nights of the year.

“We are here at the scene of an unspeakable tragedy,” Mayor Bill de Blasio said Thursday night. “Based on the information now, I am very sorry to report, 12 New Yorkers are dead.”

The fire started on the first floor of the five-story walk-up building, trapping people inside. The FDNY responded in three minutes and around 170 firefighters worked in frigid temperatures to rescue about a dozen people.

“People were on the fire escape trying to get down on their own,” said neighbor Kimberly Wilkins. “People were screaming, ‘Fire! Help, fire help!’ We knew it was trouble.”

“When I wake up, all I see is the flames going up, kids are on the fire escape,” said neighbor Rafael Gonzalez. “It was one apartment and then it escalated to two apartments. It just kept going next and up — it escalated.”

As firefighters scrambled to save tenants, the Red Cross arrived on the scene to battle the tragedy in a different way by bringing warmth to those who desperately needed it.

Volunteers wrapped residents forced out in the cold in blankets and provided buses for shelter as temperatures lingered in the teens with the wind chill below zero.

“No coat or nothing, straight shorts,” said Gonzalez. “Straight shorts so I know, therefore, I know they had to be cold.”

Some good Samaritans also stepped in offering their neighbors supplies.

“It was families in there, we know all these people, we love them,” said Wilkins. “Bringing out blankets, trying to help people.

Police said a 1-year-old girl, a 63-year-old woman and three unidentified adult males were pronounced dead at the scene.

Two others, a man and another male child were also pronounced dead at Jacobi Hospital.

De Blasio said four others were fighting for their lives.

“This tragedy is without question historic in its magnitude,” said FDNY Commissioner Daniel Nigro. “In a department that is certainly no stranger to tragedy, we are shocked by this loss.”

City records show that there are open violations for the apartment building on the first floor for defective carbon monoxide and smoke detectors, CBS2’s Magdalena Doris reported. The first floor is where the FDNY said the fire originated.

In total, there are 22 apartments in the building and no one has been able to go home yet.

Office of Emergency Management Commissioner Joe Esposito said a nearby school, Crotona International Academy, 2474 Crotona Ave., had been opened as a reception center for those displaced.

NEW YORK (CBSNewYork) — Mayor Bill de Blasio said late Thursday that 12 people are dead in an extra-alarm fire in the Belmont section of the Bronx.

NEW YORK (CBSNewYork) — The Mayor’s press secretary said late Thursday that at least six people are dead in an extra-alarm fire in the Belmont section of the Bronx.

The Mayor’s press secretary reported the deaths to the Associated Press.

The fire broke out on the third floor of a five-story building at 2363 Prospect Ave., at East 185th Street just west of Bronx Park and the Bronx Zoo, according to a tweet from the Office of Emergency Management.

Over 160 #FDNY members are operating on scene of a 4-alarm fire, 2363 Prospect Ave #Bronxpic.twitter.com/wjN9mMqCHU

The blaze was raised to three alarms and later to four.

About 170 firefighters responded to the scene, and were up against the extreme cold as they fought the blaze. Temperatures were in the high teens Thursday night, with wind chills in the single digits.

The FDNY earlier said said 15 people were injured and 12 of them were in critical condition.

CBS2’s Valerie Castro talked with one man who lives across the street from the building that caught fire.

“All I saw was this kid in the fire escape with their property, and the flames were still going as the kids were, you know, on the fire escape,” said witness Rafael Gonzalez. “What woke me up was the smoke, because I thought it was my building.”

The American Red Cross Greater New York responded to the scene, and were giving out blankets to evacuees and people who were stuck without access to their apartments.

Smoke and traffic delays were expected in the area, and people nearby were advised to avoid smoke and close windows.