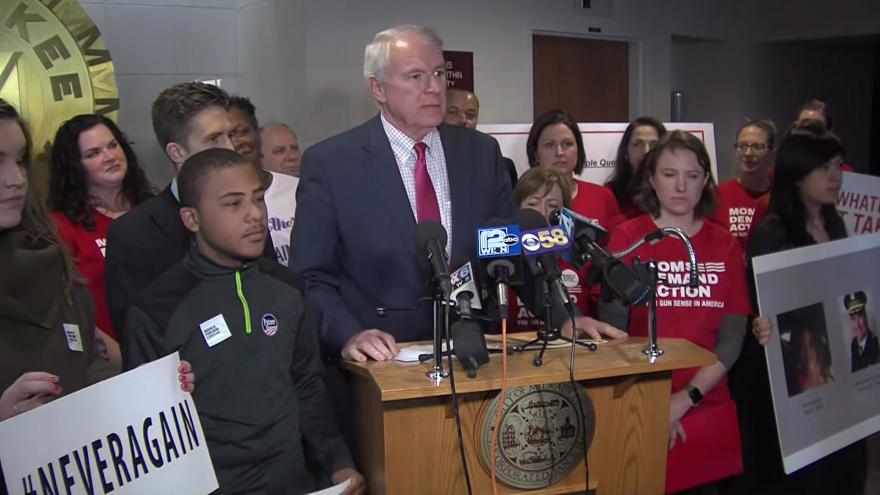 MILWAUKEE (CBS 58) – Leslie Harris is a mom of two children.

"At the time of the Sandy Hook shooting my youngest was in kindergarten. The same age as those kids who were killed. That was the moment I started seeing gun violence in a way I hadn't before," said Harris, a volunteer with 'Moms Demand Actions for Gun Sense in America.'

She stood next to other parents, a high school student and a college student.

"No kids should hear about 17 people dying and be okay about it," said Isabella Staton.

Staton is the college student. She is a freshmen at Marquette. She joined the "March for our Lives" movement when she realized people became complacent about school shootings.

"We're not going away any time soon," said Staton.

"I want students to think -- this can be them, or this can be their brother, their sister, whoever... I want them to connect on that level... I don't think there'll be 100 percent change, but it doesn't hurt to try," said Reed.

Staton and Reed say they're thankful for support on both sides of the aisle, but the groups gathered at the Milwaukee County Medical Examiner's office on Thursday to ask for universal background checks for gun owners. They want the checks to include private transactions and internet sales.

The request comes in response to the mass shooting at a school in Parkland, Floriday last month.

Wisconsin Representative Joe Sanfelippo says he's not opposed to background checks, but he doesn't think they will help.

That thinking is in line with the National Rifle Association. CBS 58 reached out to them for comment, but the request was made after hours. In a previous statement they did say:

"Background checks don’t necessarily stop criminals from getting firearms. Federal studies have repeatedly found that persons imprisoned for firearm crimes get their firearms mostly through theft, the black market, or family members or friends. Less than one percent get guns at gun shows. (Bureau of Justice Statistics)"

"Most mass shooters, including those inspired by Islamic terrorist groups, pass background checks to acquire firearms."

For more on their position, visit: https://www.nraila.org/get-the-facts/background-checks-nics/

Milwaukee Mayor Tom Barrett organized the Moms and March for our Lives groups. He challenged lawmakers to stand up to the NRA.

"Everybody understands what's going on here. The NRA is telling them, 'you can't vote on this.' That's why I'm saying we have to ask every state legislator. Not just one person. They have to get hundreds of calls," said Barrett.

"That's the most ridiculous thing that I've ever heard of," said Sanfelippo. "I can't tell you the last time I spoke to anybody from the NRA other than a constituent that may be a member."

Sanfelippo says the mayor is pretending to look for a solution and says he's already put a few in place --including straw poll laws and laws for victims of crimes -- bringing up the specific example of the "felon in possession of a firearm" law. He says there are hundreds of cases in Milwaukee County that don't get charged.

"Every time we try to stiffen penalties for violent criminals, the very same people demanding more gun laws now ignore the victims of the crims and fight the stiffer penalties and advocate for programs that keep the criminals on the street," said Sanfelippo.

He says the mayor's actions speak louder than words, and asks why the people outraged about the shooting in Florida are silent about crime in their own city.

"Mayor Barrett's complacency in all of the above makes it hard to think his press conference was anything but political grand standing," said Sanfelippo.

Barrett also brought up the 2012 mass shooting at the Azana Spa in Brookfield, saying an estranged husband was able to buy a gun online and use it to commit the deadly attack.

Barrett called Wisconsin's gun laws 'lax' and named them as a reason a convicted felon shot and killed Commande Paul Bauer in Chicago earlier this year.

"Immediately the Chicago Police Department said, 'where did the gun come from?' and this is where Wisconsin comes in. A lot of the guns that are used for crimes in Chicago come from Wisconsin because we have lax gun laws," said Barrett.