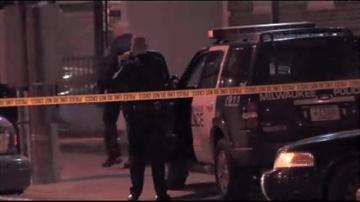 MILWAUKEE -- A 19-year-old is in police custody and authorities are seeking a second suspect tied to three armed robberies and a shooting that occurred on the Marquette University campus overnight.

A representative for the school tells CBS 58 that the robberies occurred on the campus just after 2:30 a.m.

One suspect approached a Marquette student and demanded property. That student gave up the property and was not injured.

The same suspect approached a second student moments later. That student gave up property and was not injured.

A second suspect approached a 19-year-old student near a Marquette parking structure on 18th and Wisconsin with a handgun and demanded property. A struggle ensued and the student was shot in the hand.

That student has since been treated and released from the hospital.

At this time, classes will go on as scheduled, according to a school representative.

Students are advised to monitor their student e-mail accounts and Marquette University Twitter and Facebook accounts for information.

Students are reminded to walk in pairs or groups and to be aware of their surroundings at all times.

There are also more than 300 \"blue light\" phones on and near campus that students can use to contact the Department of Public Safety at anytime.