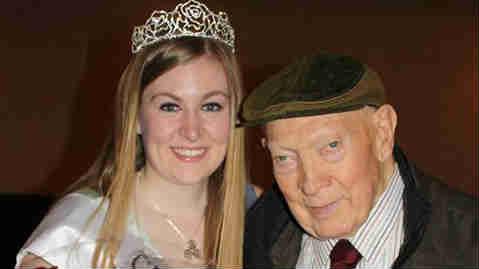 A 21 year old biology major from Marquette University is the new Chicago Rose of Tralee.

Maeve McSweeney will now head to Ireland to compete for the international title.

While it is often compared to Miss America, the Rose of Tralee has no bathing suit or three point turn in evening gowns. A rose is selected for personality. Judges are guided by the lyrics of the song on which the contest is based; \"It was not her beauty alone, but the truth in her eyes.\"

The judging at Gaelic Park in Oak Forest, Illinois, consisted of a one on one interview with a panel of judges and on stage presentation.

McSweeney sang \"The Parting Glass\" and was interviewed on stage by CBS 58's Michele McCormack  who served as emcee and was the 1985 Chicago Rose of Tralee.

McSweeney is first generation Irish. Her 94 year old grandfather, Malachy Towey of County Mayo, Ireland, was in the crowd to see her win. Her mother Julia was born in Ardee, Ireland. Her father is from Chicago where the family currently resides.

Her other Irish connections include counties Louth, Limerick, Roscommon, Sligo and Meath.

The Rose of Tralee contest is open to women of Irish descent all over the world. Regionals are held throughout the United States, Australia, England, Canada, Abu Dhabi, Dubai, not to mention in Ireland.

Nobody has ever stepped up to sponsor a Wisconsin rose so single women ages 18-28 from Wisconsin, Michigan, Iowa and all over Illinois must travel to the closest regional center which is Chicago.

Maeve is planning on attending medical school. Her goal is to become a doctor. She says giving back is essential.

\"Since my freshman year, I have volunteered one day a week in the HOT Unit (hematology, oncology, and transplant) at The Children's Hospital of Wisconsin. Through this experience I have learned that holding babies is really good medicine, that a caring word to a toddler could dry their tears and that a normal conversation with a teenager can take their mind off their illness, for a little while. From this experience, I have learned the qualities of empathy and dependability.\"