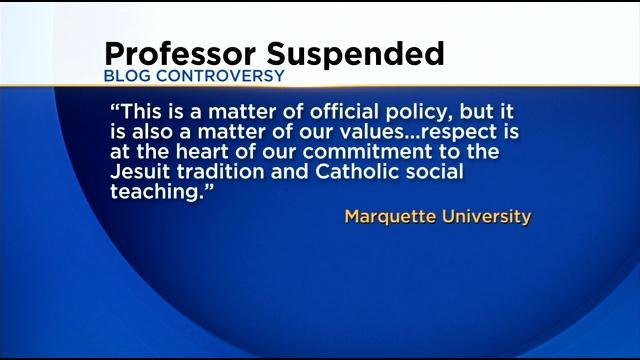 \"It was a huge brouhaha,\" McAdams said about a controversial blog post that ultimately led to him being suspended. \"I'm sort of a libertarian leaning conservative.\"

About a month ago, McAdams criticized a philosophy professor whom he believes silenced a student who expressed opposition toward same-sex marriage.

\"I'm against gay marriage -- except that wasn't the point of the blog post,\" McAdams said.

The post reads in part, \"Groups not favored by leftist professors, of course, can be freely attacked and their views (or supported views) ridiculed.\"

McAdams says some professors try to restrict discussion on views or opinions that they don't agree with.

\"If they hear an opinion expressed that they dislike, instead of arguing against it, they'll try to silence it, they'll call someone a racist, a sexist, and homophobe,\" McAdams said.

CBS 58 reached out to Marquette University on the decision to suspend McAdams.

\"This is a matter of official policy, but it is also a matter of our values....respect is at the heart of our commitment to the Jesuit tradition and Catholic school teaching,\" the university said in a statement.

After reading the blog, some students believe the university made the right decision.

\"I think for the time being suspended is a good call,\" said Marquette student Mikayla Preisner.

But McAdams says the school cannot take away his rights to free speech.

\"If you think you can shut people up, sometimes you can succeed in doing that, but sometimes, you can't--and in my case, you can't.\" he said.

McAdams says he's ready to pursue legal action if the university decides to fire him.

CBS 58 reached out to the professor McAdams criticized in his blog, but has not heard back.