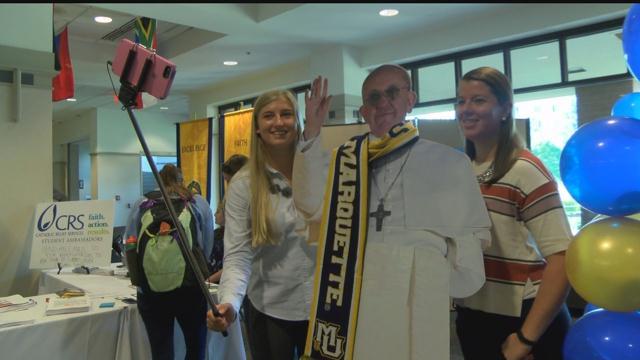 Marquette University created the “Pope Zone” with activities for its students to be part of Pope Francis’ visit to the United States.

The interactive Pope Zone includes a selfie with a pope cut out, live streaming of the pope’s festivities, t-shirts, temporary tattoos, and “Pope-corn.” Students were also tweeting about the Pope with the # JesuitEducated."

Hailey Buckingham and Ellery Fry, both juniors at Marquette, took selfies with the pope.

"Obviously we're doing a lot of creative stuff like the selfies with the pope cut out, pope corn," Buckingham said. "I think it's a really good way to get excited about the pope's visit."

Fry studied abroad in Rome and she said she was able to see the pope from a window.

"It's really interesting to have him here on American soil and actually get to hear him speak especially in English," Fry said. "It's a really unique experience."

Pope Francis is the first Jesuit to lead the Catholic Church, which is a big deal to the Marquette community since it’s a Jesuit Catholic university. Father Kent Beausoleil is one of the organizers of the Pope Zone.

"People just gravitate to the joy, gentleness and the kindness that he seem to exude," Beausoleil said. "The students are very excited. I mean you can look around at some of the stuff that they've posted on the walls and it's nothing but love right back for the Pope."