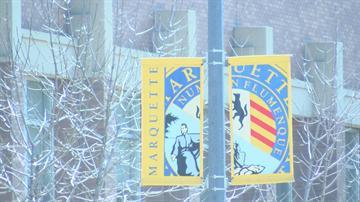 MILWAUKEE -- Students show plenty of pride in Marquette University's history, both academically and on the basketball court.  But with several important leadership positions open, plus men's basketball coach Buzz Williams' departure for Virginia Tech, you get the feeling some are nervous about what the future holds.

\"A little bitter about it, but we've got some good candidates that we're looking at,\" Sophomore Eric Russell said.

\"Buzz is a terrific coach,\" alumus Marc Marotta said.  \"I don't get this decision at all.\"

\"For the younger students, they're kind of like, 'Where's Marquette going,'\" Landry said.  \"Hopefully it's in a positive  direction.\"

The university says it's moving in that direction.  In a statment released Monday, the school said,

\"While this is a period of transition, it is also one of great opportunity.  Our conversations with final  presidential candidates have been overwhelmingly positive and we are in close consultation with the finalists as we  move forward with the selection of the next men's basketball coach.\"

Marquette alumnus Marc Marotta played basketball at the school in the 1980s.  He doesn't think the lack of concrete  leaders will drive students away.

\"You've gotta pick a place where you're comfortable with the community, with the program, the support that the  program gets,\" Marotta said.  \"Obviously the coach is a factor, but each of the recruits have to take a step back.\"

Marotta says Marquette spends more on its athletic program than most schools in the nation.  He thinks that will attract the best  candidates for the open jobs.

\"I think you want to take your time,\" Marotta said.  \"On the other hand, you don't want to take so much time you let a very good  candidate go somewhere else.\"

The university says it's getting close to choosing a new president, who then would have the job of helping to choose a new athletic director.  Marquette hopes to select a new provost by July 1.