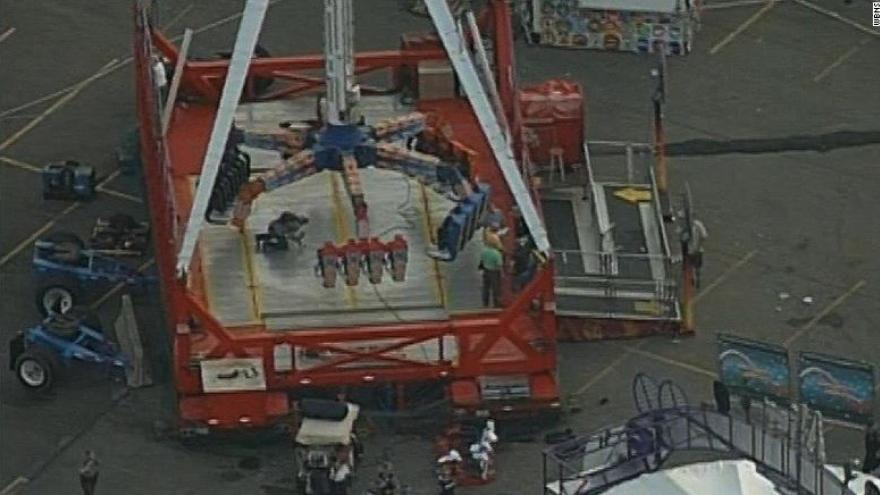 (CNN) The manufacturer of an amusement park ride that malfunctioned at the Ohio State Fair in July said on Sunday that the deadly incident was caused by "excessive corrosion."

The Fire Ball ride collapsed on July 26, killing one person and injuring seven others. The ride consists of at least six rows of seats that spin around 40 feet above the ground as the entire structure moves like a pendulum.

A video posted online appears to show several people on the Fire Ball seconds before parts of the structure, including a full row of seats, split up and fell. The ride broke apart while in motion.

Rhonda Burgess said one of her sons was standing in line at a nearby ride when the incident took place.

"The ride had four riders per cart. This piece snapped off and the riders came out of the cart," she said. "At least two (people) flew through the air at least 20 feet before landing on their backs on the concrete."

Albert Kroon, product manager for the Dutch manufacturer, said in a statement that an investigation at the scene in Columbus determined that "excessive corrosion on the interior of the gondola support beam dangerously reduced the beam's wall thickness over the years." The ride was 18 years old.

"This finally led to the catastrophic failure of the ride during operation," Kroon said.

Before Ohio fairgoers were hurled off the Fire Ball, the ride passed multiple inspections.

"It's been looked at about three or four times over the course of two days," Michael Vartorella, chief ride inspector for Ohio's Division of Amusement Ride Safety, said in July.

In his statement on Sunday, Kroon said KMG has collaborated with "industry safety experts to develop an inspection protocol" to prevent future accidents from occurring.

Among the victims in the July accident was Tyler Jarrell, an 18-year-old from Columbus, who was pronounced dead at the scene. Jarrell enlisted with the US Marine Corps that month and was scheduled to attend basic training next year, according to a statement released by the Marines.

Seven others, ranging in age from 14 to 42, were injured and treated in area hospitals.

Some of those injured were on the ride that collapsed, and others were struck by debris that came off the machine, said Ohio State Highway Patrol Superintendent Col. Paul Pride.

There were an estimated 30,900 injuries associated with amusement attractions seen in emergency departments in 2016, according to Patty Davis, press secretary for the US Consumer Product Safety Commission.

Since 2010, there have been 22 fatalities associated with riders of amusement attractions, Davis said.