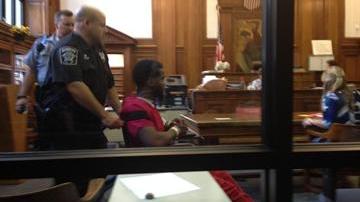 MILWAUKEE -- The man connected to a shooting at Children's Hospital last year was back in court Friday morning.  Ashanti Hendricks was shot and wounded by police after officers say he pulled a gun on them in the neo-natal unit.

Hendricks admitted to many of the crimes he's charged with stemming from the incident. Hendricks entered guilty pleas for the felony counts against him. The major charges include felon in possession of a firearm, child abuse, and resisting an officer.  He entered guilty pleas to bail jumping, felon in possession of a firearm, resisting or obstructing an officer, and another bail jumping charge. Hendricks entered a no contest plea to the child abuse charge. This comes after Hendricks dropped or threw the two month old baby he was holding when Milwaukee Police tried to bring him into custody on an outstanding warrant November 14th.   The baby suffered a skull fracture.

Hendricks was shot and wounded in the arm when officers say he pulled a gun on them in a hallway of the neo-natal unit on the 7th floor.  Hendricks could now face extensive time in prison for the pleas. Hendricks was originally going to be sentenced Friday too, but that has been pushed to December 12.