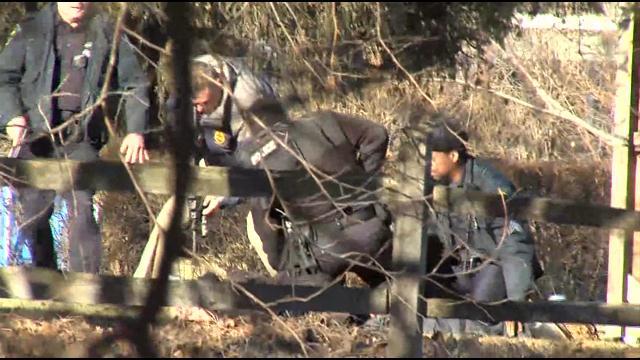 The suspect began with an attempted carjacking near the intersection of 47th and Coldspring Rd. The would-be victim drove off before the suspect could commandeer the vehicle.

Around 12:23 p.m. the armed suspect broke into a home in the 4400 block of S. 55th St., and got away with the resident's vehicle. The suspect crashed that vehicle a few blocks away from his first home invasion of the day.

Hailee Grannan told CBS 58 the man came inside her home with her loved ones Tuesday afternoon, pulled out a gun, and took her car.

"He starts talking to us. I need help. I'm from Chicago”, said Hailee Grannan. “I'm running from someone.”

"While I'm on the phone, the guy pulls out the gun, and he says don't do anything”, said Grannan. “He takes my keys which were on the kitchen table; he runs out the door, then takes my car and drives away."

Police say after crashing his getaway car, the suspect ditched his gun in a home's yard. The suspect then proceeded to commit two more home invasions on the 4300 blocks of S. 47th St. in Greenfield.

David Niedzialkowski described what happened when the man went inside his home.

"The guy came on our patio deck, and opened the door, and came into the house”, said David Niedzialkowski. “My wife was sitting right there. He said I need a car, I'm in trouble. He pulled out a gun and showed it to her, and then he left."

Police found the suspect hiding in a shed behind a home. No one was injured in this string of incidents.

"I saw the garage door or shed doors were closed", said Niedzialkowski. "Before that they were flopping in the wind when police looked in there the first time. I saw the doors were closed, and I told the officer I think he's in the shed, and that's where they got him."