Man dies after trapped under vehicle 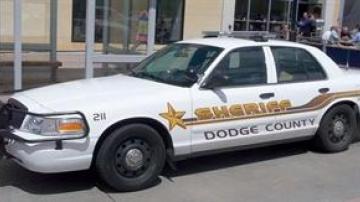 NEOSHO-The Dodge County Sheriff’s Office is investigating the death of a 46 year old man who was trapped underneath a vehicle Tuesday morning.

The Wisconsin State Patrol also responded to the scene along with the Ashippun Fire Department, Ashippun First Responders, the Lebanon EMS and Watertown EMS and Fond Du Lac Flight for Life.

The sheriff's office released a statement that said in part:

\"Sheriff Ninmann reports that at approximately 8:32 AM on May 27, 2014 the Dodge County Central Communications received a 911 call indicating that a truck located in rural Neosho had overturned and the family could not locate the 46 year old Neosho man who was driving the truck. The man was located pinned underneath the large truck. Fire and EMS were able to free the man and provide emergency medical services however the 46 year old Neosho man did not survive and was pronounced dead at the scene.\"

The name of the man has not been released yet. Apparently, officials are still trying to notify all of his family.
Share this article: