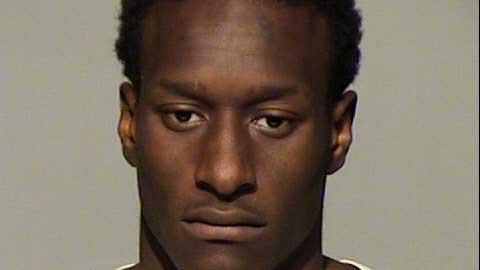 Duece Cleghorn was charged in the fatal hit and run on May 30 that involved a stolen vehicle at N. 18th Street and W. Atkinson Avenue.

The accident resulted in the death of Rio Washington, Sr.

On May 30, Milwaukee Police Officer observed a Plymouth Breeze that was on fire resting on the sidewalk on the northeast corner of N. 18th St. and W. Atkinson Ave. A Pontiac Grand Am was found about 30 feet southeast of the burning vehicle on the same corner with significant damage to passengers vehicle.

Washington was trapped and unresponsive in the car. A baby was in the car, and officers were able to get the baby out of the car.

Washington's wife was driving the car and he was in the passenger's seat.

She told police she lost consciousness and when she awoke she observed that her husband was not breathing and that her son was being attended to by paramedics.

The Plymouth Breeze had been previously stolen from Gloria Hudson on May 26. Hudson told police she did not know Duece.

Duece Cleghorn told police he had his last shot around 9:30 pm, and he was aware the car was stolen.

Cleghorn knew the car was stolen and had earlier that day driven around smoking marijuana with a friend.

Before the accident Cleghorn saw a police car and was worried he would get pulled over. He began driving and making a series of turns at 40 mph or greater to avoid police.